‘Last farewell to an old friend’: Robertson headframe torn down 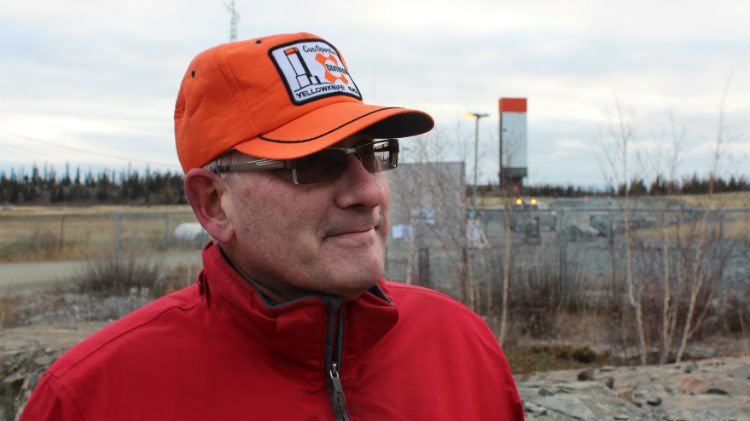 On Saturday, hundreds of Yellowknife residents made their way to the Con Mine area to watch the Robertson headframe disappear from the skyline forever.

The blast that brought the structure down could be heard throughout the city.

Standing at 76 metres tall, the headframe was the tallest man-made structure in the Northwest Territories. Its demolition was part of the latest efforts to remediate the now-defunct gold mine.

A number of previous attempts were made to save the headframe from destruction, but at around 5:00 p.m. Saturday, it came down.

Crowds of people filled the streets to watch the demolition unfold – some pleased to see the headframe go, others feeling like they were losing a piece of history.

Members of the community had their own stories and opinions on Yellowknife’s iconic landmark. Here’s why some of them ventured out Saturday.

‘A last farewell to an old friend’

Sporting his Con Operations work hat, Mike Borden arrived early to say goodbye to the headframe before its demolition.

“There’s a lot of good memories [here], good times, good people and there are also some sad occasions as well, but at the end of the day it’s going to come down and we’re going to be living without it.

Despite the nonchalance, Borden admitted he was sad to see it go.

Borden called the headframe a piece of history, and said that while he wishes the headframe could stay, from a business perspective he knows it had to come down.

“Really what it needs is a business plan … without [that] the investment is an emotional investment and there’s not a financial planner around who’s going to tell you to invest based on emotions.”

For Lorna Skinner, who’s lived Con for 30 years, the loss of the headframe comes as a personal blow.

She’s angry with the city for not preserving the landmark, and thinks they should have done more to keep it from coming down.

“This is our backyard. My husband worked at the mine for 22 years, and it makes me very sad that the City of Yellowknife does not give a s***.

“They should have done something. There’s no forward-thinking.”

Skinner says the view from her backyard will be ‘absolutely horrific’ with the headframe gone.

‘It had to come down’

Despite spending 16 years working at the mine, Paul Adkin believes it’s in the city’s best interest to take the headframe down.

“I think it had to come down,” he said. “I think it was a nuisance. It can’t stay up, people would be hurt but it is sad. It’s a lovely landmark, it’s sad to see it go.”

‘It’ll be weird for it not to be there anymore’

They came to Yellowknife two years ago, and see the headframe from their planes every day.

“It’ll be kind of weird not to see it anymore,” Urke said.

“It’s really easy to see, you can spot it from miles and mile and miles away and it’s usually the first thing you can see.”

“It’s a really cool building they have here,” Howe chimed in. The headframe is his landmark when he goes sledding, he said, and would help keep him on course.

“When we go out on our sleds you can see it from far away and you know where you’re going with it there. I guess now it’s going to be a little bit harder for us to get around,” he joked.

McLeod on the other hand, turned more serious.

“I think people are going to be really upset [that it’s gone],” he said.

“Just having the claim to fame to be the tallest building and then an important landmark for people on the lake, I think it’s going to be missed in the town.”