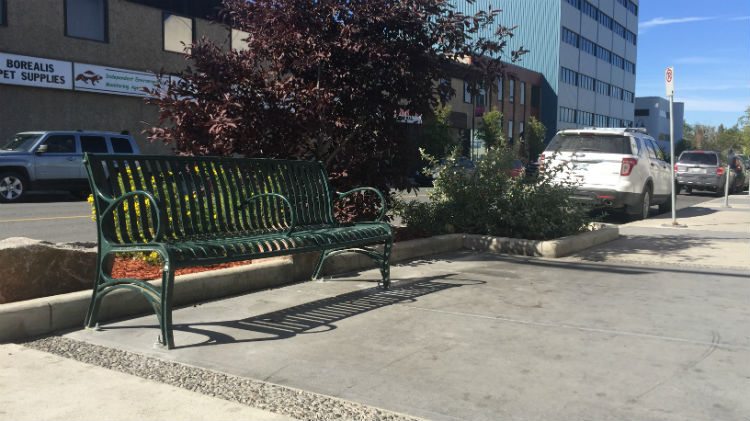 A city bench has returned to its spot along a downtown Yellowknife street after it was removed earlier this month.

A couple weeks ago, staff with the city’s department of public works removed the bench immediately adjacent to Sutherland’s Drugs at the corner of Franklin Avenue and 50 Street citing safety concerns.

On Monday night, several councillors said they were upset to see it removed especially at a time when they’re working to revitalize the downtown core.

But Dave Hurley, facilities manager with the city, said the decision was made following issues of cleanliness and abuse.

“We felt it was in the best interest of the city and its residents to remove it,” he told councillors. “That bench in that particular area had many different obstacles with it.

The issue of removing downtown benches is a sensitive one in Yellowknife.

In 2014, the city came under fire for removing benches in front of the downtown post office – a popular gathering ground for the homeless population.

On Monday, several councillors said they couldn’t understand why city staff made the decision to remove another one.

“I was a little bit shocked to find out that the bench had moved,” said councillor Julian Morse, who raised the motion to have the bench returned.

Councillor Adrian Bell agreed, saying council should have a say when it comes to the beautification and revitalization of the downtown core.

He also believes steps can be taken to improve behaviour on Yellowknife streets.

“If our by-laws aren’t able to enforce proper use of those benches, then we need to have discussions with RCMP or we need to improve our by-laws,” he said.

Towards the end of council’s half-hour discussion, Mayor Mark Heyck temporarily allocated his position to the deputy mayor so that he too could get in on the conversation.

“I think an operational decision was made that it was significantly impacting our staff’s workload and I think we should stand by that decision even if we don’t agree with it.

In the end, council voted 6-2 in favour of returning the bench to its spot outside Sutherland’s Drugs with Heyck and councillor Steve Payne opposed.