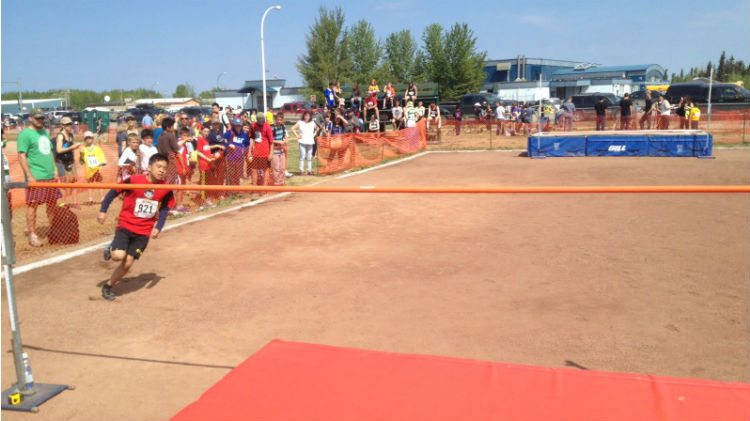 Day two of the 2015 NWT Track and Field Championships is officially in the books.

More than 1,000 athletes are taking part in the 25th installment of the competition in Hay River.

Mayor Andrew Cassidy reckons as many as 1,700 people have made their way to the community once the number of parents, coaches and volunteers are factored in.

So far, weather conditions have been favourable and that trend looks like it will carry into the third and final day of competition.

“You get it all during these events,” Cassidy told Moose FM. “We’ve had rain, snow, kids have gotten frostbite and burnt even in the same week but this week has been fantastic.

“We’re going to see some records fall. The track is fast and the field is in the best shape we’ve ever seen it.”

In fact, it didn’t even take a full day for a new record to be set on the track outside Diamond Jenness Secondary School.

Sir John Franklin’s Nicholas Bennett won the midget boy’s 3000-meter race in record time, beating a mark that was set by Hay River biathlete Brendan Green back in 2001 by a single second.

Green was part of the Olympic delegation that welcomed athletes to the championships on Wednesday night. He spoke to Moose FM during competition Thursday.

“It’s a great event and it’s great to see so many youths together … and with the opening ceremony being outside, that was special and I think it worked really well.

“It’s fun coming back and it really brings back a lot of old memories for sure.

“I remember training really hard for it since spring when there was still snow on the ground. For myself it was always a time to shine and put that hard work to use and see what you’re capable of.

“Initially I was into sprinting when I was really little so the 100-meter run was always a big one for me but as I progressed I kind of found my niche in the distance events so I made my way into the 1500m right the way up to the 5000m.

Green, who will be travelling back to Canmore, Alberta on Friday, told Moose FM a 2018 Olympic bid isn’t out of the question, but that he’ll evaluate his health and performance on a year-to-year basis.

For athletes in Hay River, track finals are slated to get underway at 8:30 Friday morning. Various field events will be taking place concurrently.

Awards will be presented shortly after track finals. For results and live updates, click here.