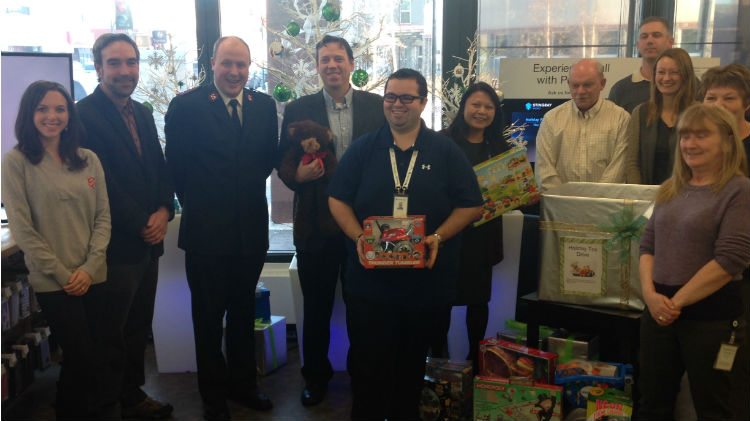 Northwestel has partnered with the Salvation Army in Yellowknife to launch a holiday toy drive.

Starting today, the company’s local retail store will be collecting toys that will be distributed to needy families in Yellowknife and surrounding communities.

Anyone who wants to donate can drop off an unwrapped toy at the store before December 18.

“We can help make Christmas great for everyone and especially those who might not have that opportunity,” said Lieutenant Dusty Sauder, executive director with the Salvation Army in Yellowknife.

“We can be that transforming influence and make it so everyone gets to have a wonderful Christmas morning.

“It’s a blessing to be able to have others who want to be a part of helping those in need.”

In Yellowknife, donated toys will be added to the Salvation Army’s traditional Christmas hamper for families with children aged 14 and under. Paul Gillard, vice president of business markets with Northwestel, said the company is happy to partner with such a charitable organization.

“It’s a real pleasure to partner with an organization like the Salvation Army and do some real good.

“We’re opening up our retail store for anyone in the public, including our employees, to bring down a toy that we’ll distribute with the Salvation Army to children and young adults in need this holiday season.

“Every child should experience the joy of receiving a new toy for the holidays, and together with our customers, we want to deliver those smiles and support local families.

“I think we all feel it in the holiday season and just being able to contribute makes us all feel a little better.”

The Salvation Army will also be kicking off its annual Christmas Kettle Campaign this week.

Starting Thursday, kettles will appear at three locations in Yellowknife – at Walmart, Canadian Tire and the downtown liquor store – three days a week until December 24.

Volunteers will man the kettles on Thursday and Friday nights between 4:00pm and 8:00pm and on Saturdays between 10:00am and 8:00pm.