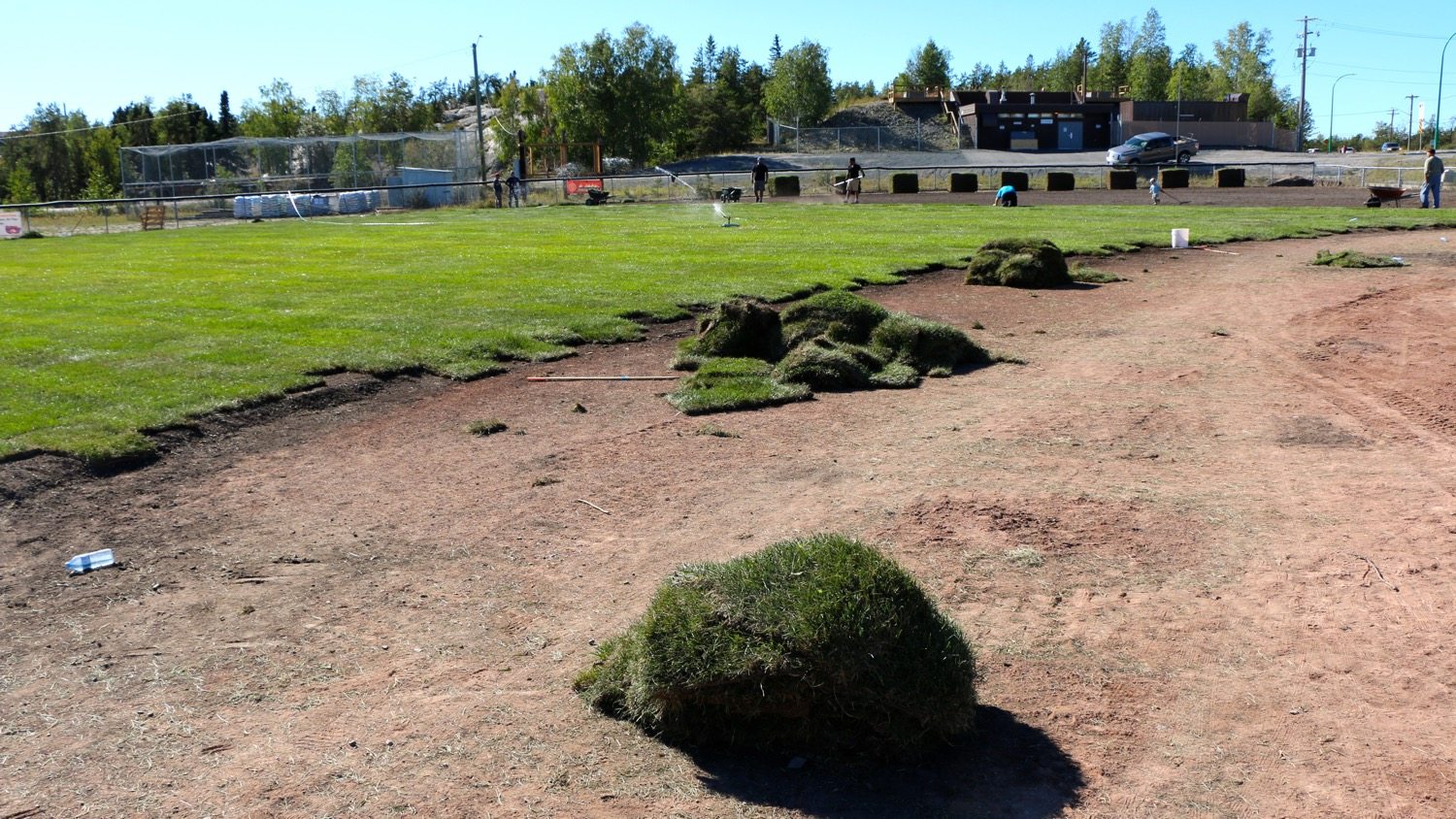 Yellowknife’s Tommy Forrest ballpark has gone green for the first time in more than half a century.

Players and volunteers laid down almost 5,000 square yards of sod at the ballpark on Saturday, replacing a dust and dirt outfield that’s been the bane of outfielders’ lives for decades.

The project, years in the making, is drawing on a $60,000 grant from the City of Yellowknife alongside months of community fundraising.

Yellowknife’s ball players hope the downtown diamond will be ready for use, replete with a grass outfield, for the start of the 2016 season.

We asked Vince Barter, who’s been at the fore of campaigns to revitalize the ballpark, how things were looking on Saturday afternoon. He replied: “A dream come true.”

“This is a project that’s probably been discussed and talked about for about 25 years,” Barter told Moose FM. “We’ve got 30 guys out here now from ball players, to family members, to community guys just jumping in.

“A couple of us said it feels like we’re visiting somebody else’s field. We’ve never experienced it here.

“You’ll hear people honking horns as they drive by. This is a community-based thing here for sure, it wouldn’t have been possible without lots of members of the community pitching in.”

Joey Borkovic, president of the city’s fastball league, said it felt “a bit weird” to find himself standing on grass at the Tommy Forrest field.

“I’m used to standing on big rocks and gravel out here,” admitted the centre fielder.

“There’s been 50 years of baseball on this field, played on the exact same outfield as it was built back in 1960.

“This is a real game-changer. We’ve looked on enviously at other fields – we want to stay downtown, we love this field, there’s a lot of memories here and this’ll put the next generation, hopefully, here forever.”

The priority now is watering the newly installed outfield, while replacing the infield with a Major League Baseball regulation crushed lava rock surface.

Beyond that, there are plans to expand the ballpark into a more meaningful community hub.

“When you do this, it’s a lot easier to get people to buy into other things,” said Barter, gesturing at the 30 volunteers laying sod on Saturday.

A “green monster”, reminiscent of the left field wall at Boston’s Fenway Park, remains a future ambition for the diamond.