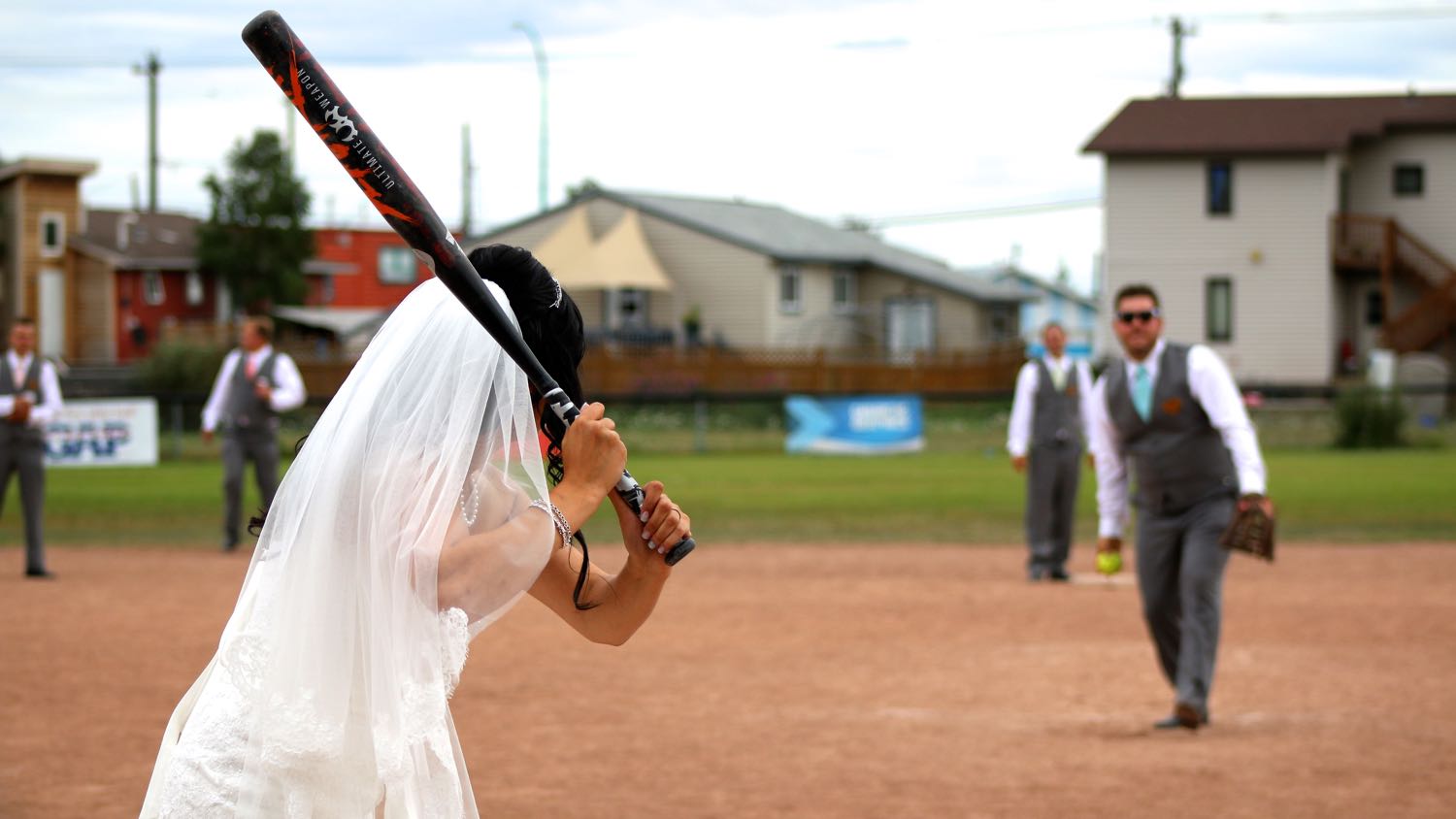 Yellowknife residents Jason and Barbara Bell celebrated their wedding by stepping onto a softball field of dreams on Saturday.

Their big day happened to coincide with the annual Gap Electric slo-pitch tournament, so the wedding party took full advantage – including a brief at-bat for the bride.

“I’m pretty confident I hit it out of the park there,” Mrs Bell told Moose FM as she brushed dirt from her once-pristine bridal gown.

Mr Bell said softball had played a vital role in bringing the happy couple together.

“We met three summers ago and softball was kind-of our common ground,” he told us.

“She was on a team and I was new back into town. I didn’t have a team so she invited me to play on her team, and it built up from there.

“Since the tournament was this week and the wedding was today, we decided to come here.”

Mrs Bell said: “It really connected us and we felt like, on our wedding day, we had to come back here. It was sweet. It was awesome.”

Opening-night marital commitments meant the Bells were unable to take part in this year’s tournament.

“We could probably have taken home the trophy, too,” said Mr Bell. “But don’t tell the other teams that.” Listen here:Tricycles are no longer just for kids.Local kid Lucas Wick is to trying to keep trikes alive.He started up a website, triketrader.ca, and...
Read more
True North Tales

Listen here:The Status of Women Council has launched an online survey, asking Yellowknife residents to report incidents of harassment in taxis throughout the territory.The...
Read more

The Status of Women Council of the NWT recognized a number of NWT Women with its Wise Women awards, which were announced around International...
Read more

Early drilling at Pine Point has found the “best ever” quality of metals at the facility.The drilling, which was done as part of an...
Read more

Hunters and trappers missing out on flooding compensation: MLA

Some hunters and trappers impacted by flooding this year may be missing out on much-needed compensation, Inuvik Twin Lakes MLA Lesa Semmler says.Semmler says...
Read more

The territorial government is looking for public input on a water boundary negotiation with Yukon.The agreement, currently being negotiated, is called the Transboundary Water...
Read more