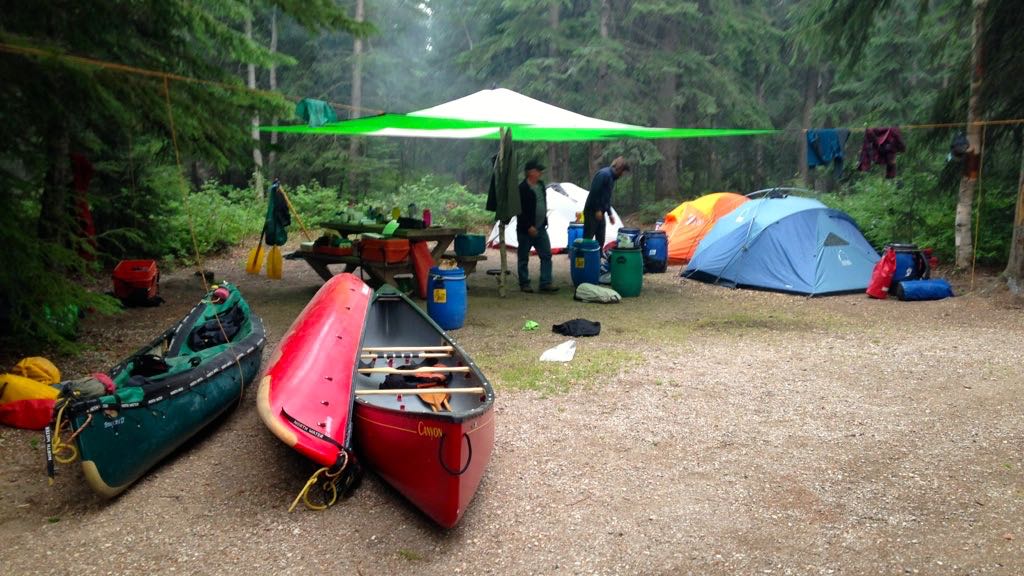 Justine Wilmot, Dylan Bajer, Liam Law and Sarah Steele Johnson arrived to find smoke heavy in the air and a group of residents on evacuation watch.

But forest fires were, by that point, nothing new to a quartet who had paddled from central Alberta.

Hay River formed the latest stop in their nine-week, 2,200-kilometre voyage from Barrhead, north-west of Edmonton, to Fort Simpson.

Moose FM spoke to Wilmot, 28, about the motivation behind their trip and their experience so far. Here’s what she told us.

We knew about the wildfires before we reached Hay River. We had noticed forest fires along the Slave River when we were coming up, and it was most prominent at the delta of Slave River and the Great Slave Lake.

We saw lots of billowing fires there – and camped by some, not knowing if they would reach the shoreline. There were a few mornings where we woke up and thought, ‘Wow, this is quite a sick smell of smoke.’ We had to hope the fire wasn’t really close to us.

The reason for the trip? You could call it a commute. My partner, Dylan, and I work as river guides in the Nahanni so we’re finishing our trip in Fort Simpson. From there we’ll fly to the Nahanni.

To do this, the four of us either had to quit work or take a leave of absence. We planned for a 63-day trip in total, and there will be 14 days left when we leave Hay River.

The beginning of the trip was the hardest. None of us had really planned our own personal expeditions of this length before. I did all the route planning, and planned for us to push 80 kilometres the first five days – which was a big mistake.

We were fresh in paddling, we hadn’t built up any strength, and we thought the water flow would be higher, so we were slowed down by the lack of volume. We had to push hard to make up days, on the water by 9am and off the water by 9pm, for weeks.

Finally it calmed down, and now we’re doing 35-kilometre days with rest days every other day. So far, it’s been about a week between towns. The most remote section was from Fort McMurray to Fort Chipewyan.

I’m doing this because I love the idea of challenging myself in an environment that seems kind-of crazy. I grew up paddling on lakes in Ontario with my family, listening to my mom’s stories of canoe trips. I love canoeing and I really wanted to see what I’d be like on a long expedition.

I’ve read all the books about journeys like this, and we’ve been hearing the stories of the steamboat coming in to Fitzgerald, how trade used to work, hunting and trapping, how communities were built around the river. We feel pretty lucky to be out here.

In the future, we’re contemplating spending more time in the North and maybe moving to the NWT, or even the Yukon.

Hopefully, I can make this a part of my life in the future. This, to me, is going to be the first of many – I hope to do this every year or two, for the rest of my life.