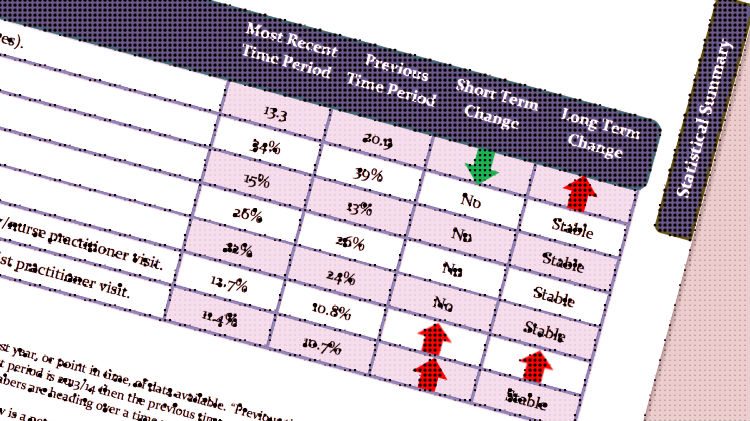 This week, the NWT published a summary of performance indicators – in other words, key statistics – for health and social services in the territory.

It’s the first time a report like this has been made available, creating what the territorial government calls a “general snapshot of important trends and issues” related to the health of NWT residents.

Most of the figures may not be much of a surprise, but they do serve to highlight where the territory’s problems lie, and how they compare to the rest of Canada.

On this page, we’ve provided a few of the highlights. All the headline figures quoted are the most recent available. The full report is here.

How healthy do we feel?

54 percent of us say we’re in excellent or very good health.

“The NWT rate has not changed significantly between 2003 and 2013,” it adds, “whereas the national rate has increased slightly from 59.7 percent to 61.3 percent over the same time period.”

STI rates in the NWT are way above the average

There are 23.7 cases of sexually transmitted infections per thousand people in the Northwest Territories.

“The incidence of STIs in the NWT is over seven times higher than the rest of Canada’s 3.2 cases per 1,000,” says the report, as calmly as possible, quoting the national average as of 2010.

“The rate of STIs can provide a proxy of the degree to which unsafe sex is being practised,” it notes. There isn’t any further discussion in the report of why this rate should be so high.

Is the NWT immunized?

63 percent of NWT children are fully immunized by the age of two.

That proportion is stable, and covers a range of six vaccines.

Five of those vaccines have a national target percentage which the NWT is trying to hit – in all but one instance, the territory is significantly below that target.

“The NWT has a much higher rate of acute care hospitalizations for mental illnesses than the national rate,” says the report.

That rate is currently 12 cases per 1,000, and the long-term trend shows it to be increasing.

“Over the last 10 years, the rate of hospitalizations has been trending upwards,” continues the report.

“Alcohol and drug issues (dependency/abuse) represented just over half of all mental health hospitalizations.

“The NWT’s mental health hospitalization rate is, on average, approximately over twice that of the national average (2012/13).”

A third of NWT residents smoke

The national smoking rate is 19.6 percent of the population. In the NWT, a third of people aged 12 and over smoke.

“Between 2003 and 2013 there have not been any significant changes in the NWT smoking rate,” says the report, “whereas the national rate has decreased from 23.4 percent to 19.6 percent over the same time period.”

30 percent of NWT residents aged over 12 say they drink heavily, and 24.4 percent of adults are obese.

Both of those figures are reported to be essentially stable.

The figure for heavy drinking is considerably higher than the national rate of 19 percent.

“Between 2003 and 2012 there have not been any significant changes in the NWT rate, whereas the national rate increased marginally from 17.5 percent to 18.8 percent over the same time period,” the report notes.

The national obesity rate is 18.2 percent – though that rate has increased from 14.9 percent in 2003, whereas the territory’s rate has flatlined.

There is a shortage of physicians, nurses, and social workers in the NWT.

The data in this report tells us a little more about the gaps in the territory’s healthcare staffing.

The vacancy rate for family physicians is 34 percent; for nurses, it’s 26 percent; and for social workers, it’s 22 percent. National figures aren’t presented for comparison (or immediately available online, when we looked).

“Vacancies in these positions significantly impact the capacity of health and social services system,” cautions the report – but those figures represent an improvement on previous years.

“As of March 31, 2014, the NWT had some relatively low vacancy rates – historically speaking – across some of these occupational categories,” the report continues.

“Family practitioner vacancy rate was the lowest it has been in nine years … and for social service workers it was near the lowest in terms of the nine years examined.”