“Am I next?” Yellowknife walks for slain Cindy Gladue 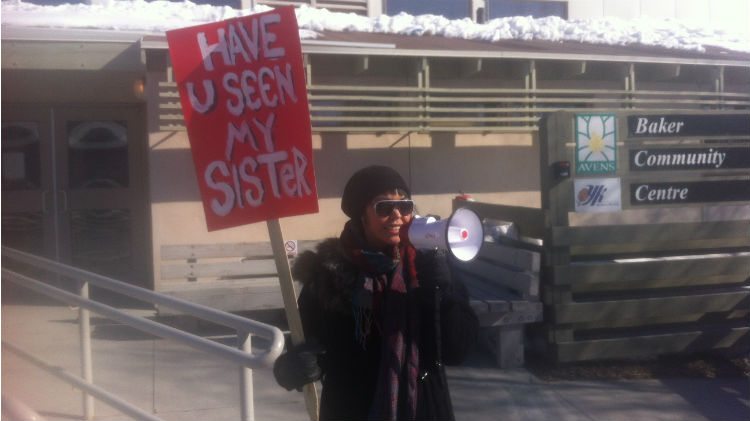 A group of 30 people marched the streets of downtown Yellowknife Thursday to bring awareness to missing and murdered aboriginal women in Canada.

The protest was part of a national initiative to bring attention to violence against women following the case of Cindy Gladue.

Gladue, an aboriginal sex worker and mother of three, bled to death in the bathtub of an Edmonton hotel room four years ago.

The trial of the man accused of killing her received little national attention, but the jury’s decision to acquit him outraged people who called the decision another sign of systemic bias against indigenous women.

Two weeks ago, a jury in Edmonton found Bradley Barton, a trucker from Ontario, not guilty in Gladue’s death – a decision that sparked protests from Victoria to Toronto Thursday.

Here in Yellowknife, Charlotte Overvold helped organize a march through the downtown core over the lunch hour.

“I couldn’t sleep last night because I was thinking about what was going to be happening across Canada today,” Overvold told Moose FM. “I wasn’t only thinking about Cindy but about her family and my loved ones too.

“Cindy isn’t a stereotype and she isn’t garbage. None of our sisters are.

“We’re strong, we’re resilient, we have voices and that’s why we came together today. They walked with us today and we walked with our sisters.”

Dene National Chief Bill Erasmus took part in a drumming ceremony before joining in on the march.

He says cases like Gladue’s remind us how susceptible some of us are to violence.

“It’s important that we get to the bottom of all the violence that’s occurring in the country and it’s not only directed at women,” he said.

“Unless we speak out and unless we present options for people, we’re not going to make much progress.

“This is something that we have to take control of. We have to ask ourselves ‘why is there so much violence?’”

RCMP Constable Elenore Sturko says public protests like those in the name of Gladue are important in that they bring attention to larger, societal problems.

“Anything that will help keep the spotlight on missing people or unsolved murders is extremely important,” she told Moose FM.

“Tips from the public remain one of our strongest investigational tools and it’s events like this that bring attention to missing people or unsolved murders.

“Hopefully, these types of meetings can bring a conclusion to some of these investigations and provide closure for families.”

For many of Thursday’s protestors, relief struck when it was revealed that Crown prosecutors in Alberta had filed an appeal over Barton’s acquittal.

“When I saw everyone come together today and I heard there had been an appeal, my heart did backflips,” Overvold said.

Erasmus added in a statement: “We are happy with the decision of Alberta prosecutors to appeal the acquittal.”

“It’s about violence yes, but it’s also about how the court failed indigenous women all together.

“The reason why this appeal is so important is because it makes very clear that violence is not normal and that the original decision must be overturned.

“The issue of missing and murdered indigenous women is real.”