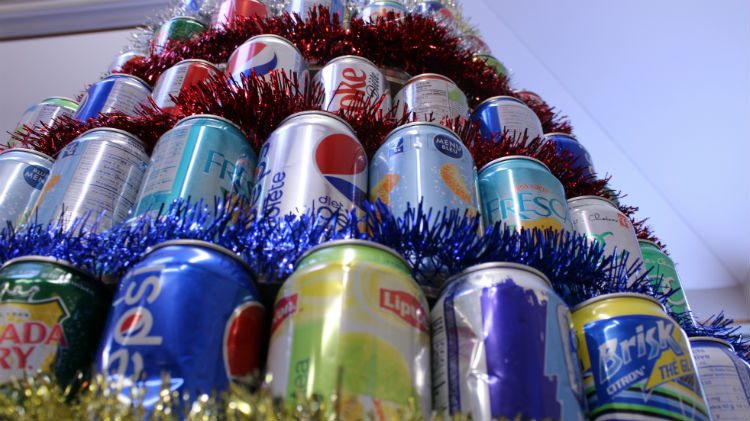 One man’s trash is another man’s parade float, at least for the Yellowknife Association for Community Living who took holiday decorating ingenuity to the next level this season.

The association will be among those marching in Saturday’s Santa Claus parade, and they’ve chosen to make the centerpiece of their parade float a seven-foot tall Christmas tree crafted out of wood, tinsel and 259 recycled aluminum pop cans.

“The cans represent one of the services that clients here do every week,” explained Darron Letts, communications director with the non-profit organization.

“That [service] is to pick up recyclables at organizations and businesses and government offices throughout the city.”

The recycling pick-up is one of the main services the association provides, and Letts says the aluminum can parade float was created to highlight a service people in the community might not know about.

“[The association] thought it would be a great idea to feature recycling projects in the parade to educate people about the services that our clients do every single week,” he said.

“These [cans used in the float] are some of the ones that were plucked out of the bags that were collected from businesses and government offices and other organizations last week.”

The tree was built over a few hours Friday night by the association’s young adult group, one Letts says was a ‘fun project’ filled with lots of smiles.

“It’s very hands-on,” he said. “We have very creative clients here and they have a lot of fun doing things together. The holiday season and the lead-up to it is a great opportunity to exercise some of that creativity.”