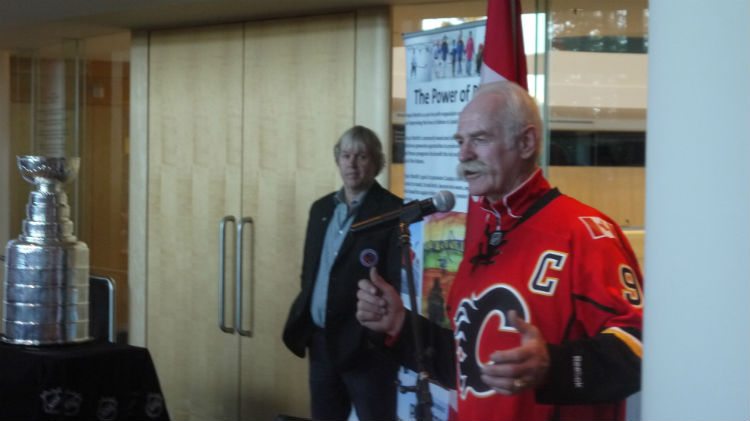 The Northern Tour of Legends wrapped up this past Saturday in Yellowknife.

The tour, a combined effort between Project North, Scotiabank, First Air, Canadian Tire and the National Hockey League, started on April 28th in Kugluktuk, Nunavut and made stops in five other remote northern communities before wrapping up in Yellowknife at the Legislative Assembly.

The Stanley Cup, along with Lanny McDonald, Mark Napier and representatives from all of the partners, traveled over 5,000 kilometers over the three-day tour and delivered 50 bags of new hockey equipment to Kugluktuk and Igloolik.

The final event of the tour took place in Yellowknife on Saturday evening. Hundreds of people turned out to get their picture taken with the Cup, as well as to meet and get autographs from McDonald and Napier. Both McDonald and Napier were more than generous with their time, staying at the legislature until every fan had gotten an autograph and picture.

Diana Hart, a spokesperson with Scotiabank, said that the timing for the Yellowknife event wasn’t the greatest but it was something that couldn’t be avoided. The tour arrived in Yellowknife a short time before the event began at 8:30pm and they were on a flight back south early the next morning.

Though it wasn’t the first time for most of them in the North, they all said this was the most memorable trip and they would all come back in a heartbeat.

This was the second time in the span of seven days that NHL alumni had been in Yellowknife.

Read: ‘Time to give back’: Flames alumni to attend Memorial Challenge