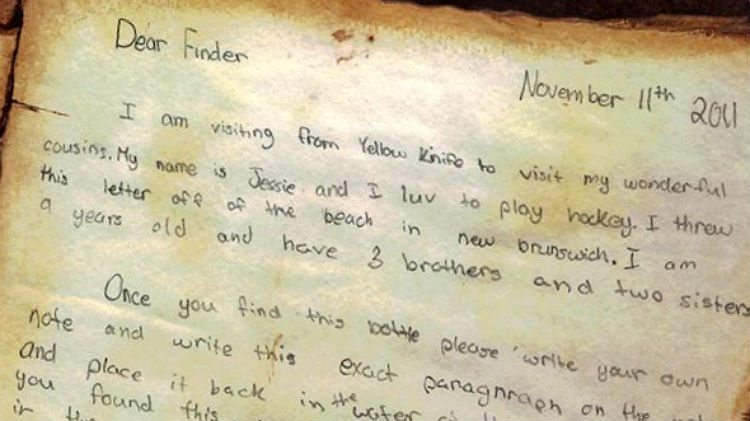 A message in a bottle, apparently written by a child from Yellowknife, has washed up on Prince Edward Island.

The letter is dated November 11, 2011. Its author claims to be a Yellowknifer named Jessie, nine years old at the time, who threw the bottle into the ocean from a New Brunswick beach.

Now, the people who found the message are trying to trace Jessie.

“This person is going to recognize themselves. Not everyone from Yellowknife has put a letter in a bottle and sent it off from New Brunswick,” said Tracy Brown, executive director of the Bedeque Bay Enviromental Management Association on PEI, whose members found the bottle.

“It turned up in one of the tributaries up the main branch of the Dunk River, which leads into the Bedeque Bay estuary,” Brown told Moose FM.

“We find really weird, unique things in our river when we do stream restoration work, but this is the most interesting we have found so far. Our river is very tidal and the tide goes up very far, so it’s amazing to see how that would be sucked up the river like that.”

There’s no way to prove the letter’s authenticity. One or two elements, such as a gag about not drinking the wine that was in the bottle, seem to have had an adult’s touch. The scroll-like backdrop on which the letter is written is a template freely available online.

“It was 2011 so this thing has been wandering around the ocean for quite a little while,” said Brown. “It was sealed up really well. When we opened it up it was nice and dry.”

If Jessie is real, they would now be 12 or 13 years old. It’s not clear if they are male or female. In the letter, they say they have three brothers and two sisters.

If that sounds like someone you know – or like you – then you can get in touch with us and we’ll connect you with the bottle’s finders.

“It’d be really nice if we could find out who this child was,” said Brown.

Her staff is now preparing to follow the letter’s instructions.

“The letter does request that whoever finds it writes a response, seals it back up in the bottle and sends it back out to sea – so that’s what we’re going to do. We’ll send it out on the next outgoing tide.”