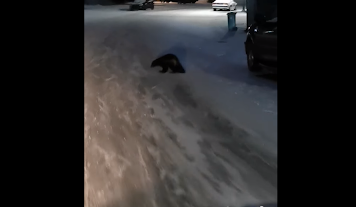 Yellowknife residents on Dagenais Drive and Con Road were sharing the streets with a wolverine late Wednesday night.

Wildlife officers at the NWT’s Department of Environment and Natural Resources are investigating.

The territorial government says the animal has a “stable but sparsely distributed population numbering in the thousands” in the NWT.

There are between 3,000 to 6,000 wolverines in the Northwest Territories as of 2014, according to an NWT Species at Risk committee report.

But they usually don’t thrive near human settlements, according to the Department of the Environment and Natural Resource’s website.