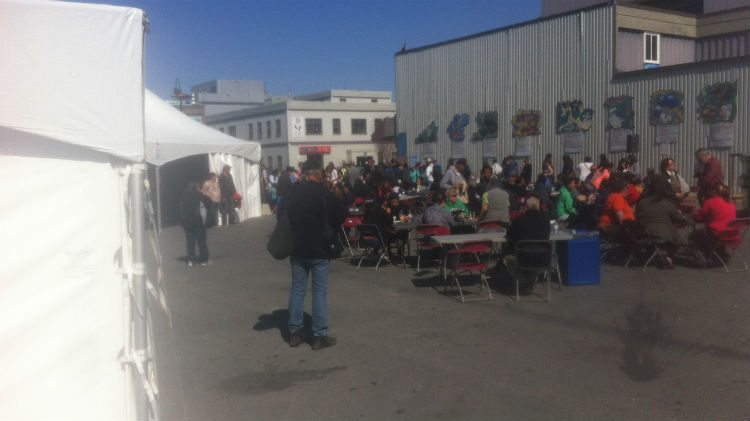 The purpose of the count is to provide a snapshot of the community’s homeless population so that programs and services dealing with the issue can be improved upon.

City officials and volunteers invited homeless people and at-risk residents to join them for four hours at the vacant downtown lot on the corner of 50 Street and 50 Avenue and Flag Pole Park on Old Airport Road.

There, participants were treated to a hot lunch and were asked to fill out a short survey.

“Our survey consists of 11 questions that are generally quite basic,” said Dayle Hernblad, homelessness coordinator with the City of Yellowknife.

“We want to understand the population and some of the challenges and issues so that we can serve them appropriately.

“We are getting extremely positive feedback from the persons that seem to have no housing.”

Point-in-time counts have become an established practice across much of Canada and North America.

Hernblad hopes Wednesday’s count can be used in the fight to eradicate homelessness in Yellowknife.

Read: New Facility Will Take In Homeless Youth In Yellowknife

“We’re trying to establish a baseline of the number of homeless persons that are in our community so that as we go forward with our programs, services and initiatives, we can actually gauge whether or not we are successful in eliminating homelessness in our community.

“Statistics and data are a very large part of understanding the depth of the issues in our community.”

In the future, the City says point-in-time counts may be required of communities in order to be eligible for federal homelessness funding.

Preliminary results from surveys are expected to be released in mid-June, with a full report coming later this year.

2021-22 NWT Education Hall of Fame Inductees Have Been Announced