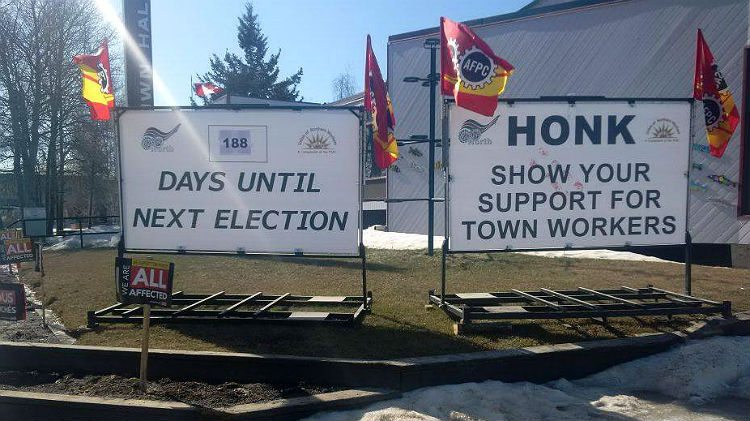 The Town of Hay River has refused a union call for binding arbitration to end the ongoing strike.

Last Wednesday, the Union of Northern Workers (UNW) called for “a neutral party to decide what is best” in the two-month dispute over pay increases for more than 30 town staff.

Now, the town says binding arbitration is not the way forward.

“Hay River Town Council has discussed the advantages and disadvantages of this process and has determined, in our perspective, it is not the best approach to resolve this ongoing labour dispute,” read a town statement issued on Tuesday.

“We have shown a willingness to continue bargaining, we feel optimistic an agreement can be achieved and that engaging an outside party to determine the outcome of these negotiations is not the appropriate solution.

“Our hope is for this dispute to be resolved at the community level.”

In response, the union said the town’s decision would “prolong community divisions and hardships”.

“This is a continuation of the arrogant, harsh stance the town has taken throughout negotiations,” said Todd Parsons, the UNW president.

“There’s no rational explanation for the town’s refusal to bring a fair end to this strike. Obviously, the town leaders prefer confrontation to cooperation.”

Last week, the town accused the union of issuing an unacceptable ultimatum as the latest round of negotiations broke down.

“The door was closed fairly quickly when the union refused to continue to negotiate with us,” said mayor Andrew Cassidy at the time. “They gave us the ultimatum they’ve always been accusing us of delivering.

“We’re ready to continue negotiating. It’s up to the union to get us back to the table with a counter-offer.”

When those talks ended, union representative Jack Bourassa told Moose FM: “We decided to forgo the pleasantries of back-and-forth, tit-for-tat bargaining – but the employer was having none of it.

“At this point, I’m sitting here with my jaw on my lap and wondering what, exactly can we do? We’ve come down about as low as we could. We’ve done everything we can to reach an amiable agreement.”

Workers have been out on strike since February 9, with a number of forthcoming major events in the town set to be picketed.

“Many of those events are not town-sponsored or town-coordinated,” said Cassidy. “Those events should be hands-off.

“If the union chooses to picket them, that’s truly unfortunate, because the issue at hand is between the town and its workers. It has nothing to do with track and field, the NWT Association of Communities [whose annual meeting is coming to the South Slave] or the Lobsterfest.

“If these events take place at venues that have nothing to do with the town, my personal belief is any picketing going on there is vindictive, and simply to try to put pressure on those organizations to get the town to give in to the union’s demands.”

On Tuesday, the union reaffirmed a number of events were “in jeopardy” – even threatening summer day care services.