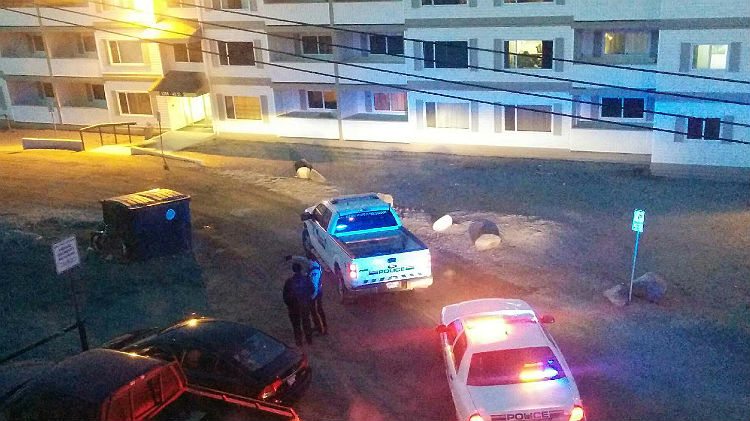 Police say three suspects have been arrested and a man has been sent to hospital after Sunday night’s shooting and high-speed chase in Yellowknife.

RCMP say they responded to several reports of shots fired near the Fraser Arms apartment building, where they found one man suffering from an apparent gunshot wound.

At around 9:30pm, residents say they heard up to 10 shots being fired in the vicinity. The man is believed to have been wounded in the shoulder.

RCMP vehicles remained at the scene for a number of hours, with at least one ambulance in attendance.

Several people reported seeing an SUV speeding from the scene.

“A dark-coloured SUV spun round and beat feet outta there, heading down past the high school.”

Dionne Bowden told us: “I saw a vehicle trying hard to back up right below our front windows. An older model SUV, grey in colour, and it was in a hurry.”

By 11pm, RCMP had traced the SUV to the Range Lake area – but the driver sped off when police tried to flag it down.

One Finlayson Drive resident shot video footage of the ensuing high-speed chase, which took in much of the Range Lake and Kam Lake neighbourhoods.

He identified the vehicle being pursued as a Dodge Durango SUV, and said at least one police vehicle had collided with it.

“Five cops’ cars chasing a Durango. One cop rams the Durango, Durango loses control, runs into a neighbour’s car, and then speeds away.”

This truck got hit in the chase on Williams. pic.twitter.com/fBFg3jAMLu

Police say the chase eventually ended on Grace Lake Boulevard, when the SUV became too damaged to continue.

In a statement issued on Monday morning, police say three suspects have been arrested with charges pending. The condition of the gunshot victim is not known.