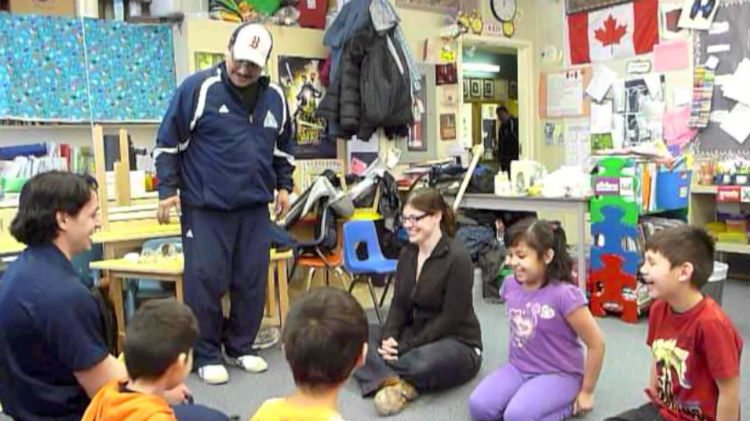 The principal of a Dettah school has been named among the top 40 principals in Canada.

Lea Lamoureux has led the First Nations community’s Kaw Tay Whee School for seven years. In that time, enrolment has more than doubled to 37 students.

“When Lea came to the school, the achievement level was needy, let’s just say,” says Rod Thompson, from The Learning Partnership.

“Students were reading below grade level, attendance was an issue and enrolment was an issue.

“Through Lea’s leadership, she outreached and sought support from her staff and her community, and really has transformed students in the school to the point where, at this point, students are reading at or above grade level in 80% of cases.”

Lamoureux arrived in Dettah having previously taught in both Fort Good Hope and Fort Simpson, as well as a spell in New Zealand.

“My first priority [in Dettah] was to work with my team and create a safe, caring environment my students could have ownership over, so that they liked coming to school and they were comfortable.

“And then right away, raising literacy levels was very important to us.”

So was punctuality. The school aims for at least 85% on-time attendance each day, and Lamoureux has taken some drastic action to promote that.

“She took on the issue, even purchasing and distributing alarm clocks to some families in the school, just to make sure kids could get to their ‘On Time By Nine’ initiative,” says Thompson.

“It was really fun and simple. We did an expository writing lesson, which is step-by step writing how to do something – the older students figured out how to set the alarm clocks, they wrote instructions and trained the younger students in how to do it, and now everybody has an alarm clock,” she says.

“We can also do texting, we do phone calls, sometimes we do door knocking – we have a lot of different initiatives about getting to school on time.”

Other programs at Kaw Tay Whee include gardening, which is a passion for both Lamoureux and her husband, a fellow teacher at the school.

“Offering things like gardening helps us learn where food comes from, and it’s so cross-curricular,” says Lamoureux.

“It helps us think about healthy eating but it also gives us something to nurture and help grow, which is a life skill, too.”

Lamoureux’s prize is a trip to a five-day executive leadership training program in Ontario, alongside a gala awards dinner celebrating the achievements of this year’s chosen principals.

She says the award belongs to “a wide group of people” at the school.

“Lea is a transformational leader,” concludes Thompson. “She has moved that school to greater levels of achievement for the students.”