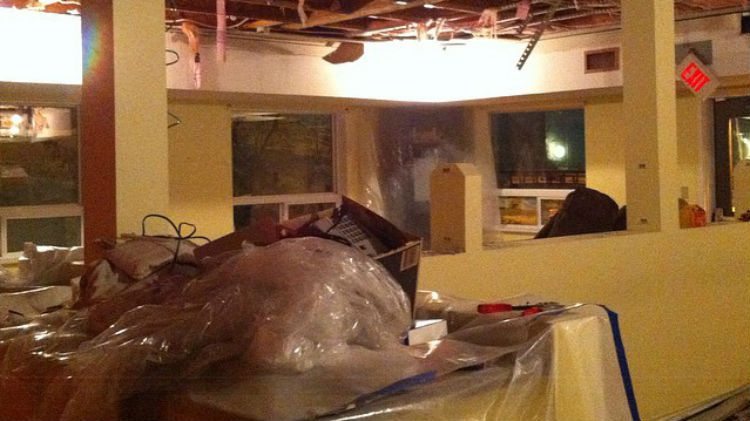 “It’s hard to understand. I guess the industry works at its own pace and insurance works through its own processes, but it’s really hard to understand why it takes two months to demolish a restaurant and however-long – we don’t know yet, even – to rebuild it,” Dean Procure told Moose FM.

A contractor is set to begin the rebuilding process shortly, after workers finish stripping out the water-damaged remains of the old restaurant.

The accident meant the restaurant had to lay off staff and cancel bookings just before Christmas.

“We had excellent staff – we invested a lot in training them and really creating an environment where they could be the best they could be – and we’ve lost that now,” said Dean Procure, who has herself been forced to find alternative employment while repairs are carried out.

“We’ve got to find new staff in some cases and hopefully entice some of our old staff back, but they haven’t been sitting around doing nothing for two months. You can’t survive in Yellowknife doing nothing.

“Then we’ve got to invite our customers back. We’ve got to find a way to let them have faith in us again, because we did have to cancel some reservations for Christmas time – the hardest time of the year to tell people that the party they booked months ago, we can’t honour, because the restaurant is gone.”

For Dean Procure, one of the most important lessons from the restaurant’s ordeal has been to plan thoroughly for this kind of disaster in future.

“I think the biggest lesson is to remember that anything can happen at any time,” she said.

“We say that and we think that as small business owners and entrepreneurs – we literally say that all the time – but we don’t plan for it.

“I think you have to plan for anything can happen at any time.”