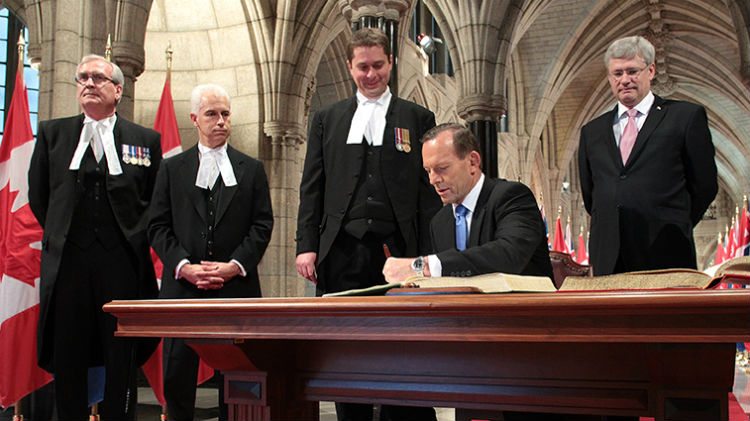 Former Northwest Territories mountie Kevin Vickers says there is “no greater honour” than his appointment as Canada’s new ambassador to Ireland.

Vickers (pictured, far left, during a visit by Australian Prime Minister Tony Abbott) served in the NWT for almost a decade but is best-known as the parliamentary sergeant-at-arms who helped bring down Ottawa gunman Michael Zihaf-Bibeau in October last year.

The 58-year-old’s brother, Will Vickers, is a teacher at Yellowknife’s Weledeh Catholic School.

“As a Canadian with family on both sides hailing from Ireland, there could be no greater honour,” read a statement issued by Kevin Vickers on Thursday.

“I am humbled by the invitation to serve my country in this way.”

Prime Minister Stephen Harper said, in a statement: “Kevin Vickers has shown profound leadership and dedication to the security of Canada and its national institutions.

“His extensive experience working with Parliament, as well as his bravery and integrity, will serve to deepen close bilateral relations between Canada and Ireland in the years ahead.”