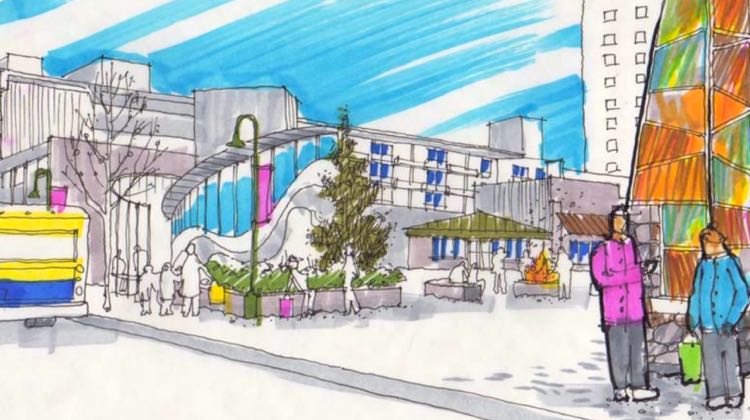 A $6.5 million plan to transform downtown Yellowknife had its first airing in front of councillors on Monday.

Architect Simon Taylor, hired by the city as a consultant, presented plans to turn the disused 50-50 lot – where Franklin Avenue and 50 Street meet – into an open-air plaza.

These are the first fully formed proposals to reach city council since the city bought the lot for $1.45 million late last year. The lot has spent two decades undeveloped, held back by social issues and a lack of downtown investment.

“I’m very impressed and like what I see,” said councillor Cory Vanthuyne of the 65-page document.

“If the momentum created up to today starts to fizzle and fade, I fear it’ll be a very long, hard road to travel to ever bring new life back to the downtown.”

However, some councillors felt the plans did not justify their multi-million dollar price tag.

The proposed plaza includes a new-look entrance for the adjacent Centre Square Mall, an opportunity for the mall’s stores to make use of the plaza space (for example, outdoor seating for restaurants), and a space for artists to perform or display their work.

Also featured is an ‘iconic’ washroom building and bus stop.

“Instead of sitting here being paralyzed, maybe we should get on with things,” said councillor Dan Wong.

“Homeless people should be welcome in that space, regardless of its purpose. For me, a big part of this project is actually that public washroom – it’s a way we can deal with dignity and basic needs for folks on the street.”

“In very real terms this is a dead portion of the downtown, and it’s been like that for 20 years,” Taylor told councillors.

“Centre Square Mall is very inward looking, typical of malls from 30 years ago. What we propose is to open up the upper mall onto the plaza and then physically modify the plaza somewhat to allow for a mixture of events to occur – you’ll have the potential for social gathering.”

Taylor said concerns about attracting residents to the outdoor plaza in winter were unfounded, citing the example of Edmonton’s Churchill Square, which is used to host events throughout the year.

Councillor Adrian Bell wanted a clear commitment to the project from the two owners of the upper and lower mall, both of which recently changed hands, before proceeding. However, Taylor said the city had to take the first step.

“The previous mall owners hadn’t spent dollar one since 1989,” said Bell. “Having this new [upper mall owner] on board is very interesting, but there’s a big difference between someone on the phone saying they’re very interested, and seeing dollars committed.”

“They have also seen the city saying ‘we’re going to do a bunch of things’ for some time, and nothing has happened,” replied Taylor.

“They are keen to see the city step forward and start to organize this. The city has to say it’s going to go into that next step. The [owners] are going to be there. They have identified that. It’s really the nitty-gritty of how much they’re going to do.”

The full plans call for the public washroom and bus shelter building to become a “landmark and architectural element, signifying the downtown core … acting as a sort of billboard to the downtown”.

The washrooms would be predominantly transparent and kept at a relatively low temperature, to discourage anyone from staying inside the building for lengthy periods of time.

Longer-term – and beyond the scope of this stage of the downtown revitalization – there is the suggestion that a new library could be built in the area, alongside other public services.

Councillor Rebecca Alty questioned, given high levels of support for a library in the public engagement process, why no library was included in the immediate plan put forward on Monday.

Alty also felt the 50-50 lot proposals would create an open-air plaza that competes unnecessarily with the Somba K’e civic plaza, without being able to hold as many people.

The city believes it currently has just over $1 million in capital budget funding for this project, alongside six-figure sums from the CanNor development agency and a separate downtown reserve fund.

Administration wants to find more funding avenues internally, but also notes that its plans will require “significant investment” from the two mall owners. For the moment, there is no set date for the completion of transformation work on the lot.

“Further commitment is essential,” urged a review of the proposals prepared by city administration. “The next step of capital investment is required if the condition of downtown Yellowknife is to improve.

“Without this commitment, no tangible social, economic or physical progress will have been made over the past decade.”

The plans will be brought to a full council session next week.