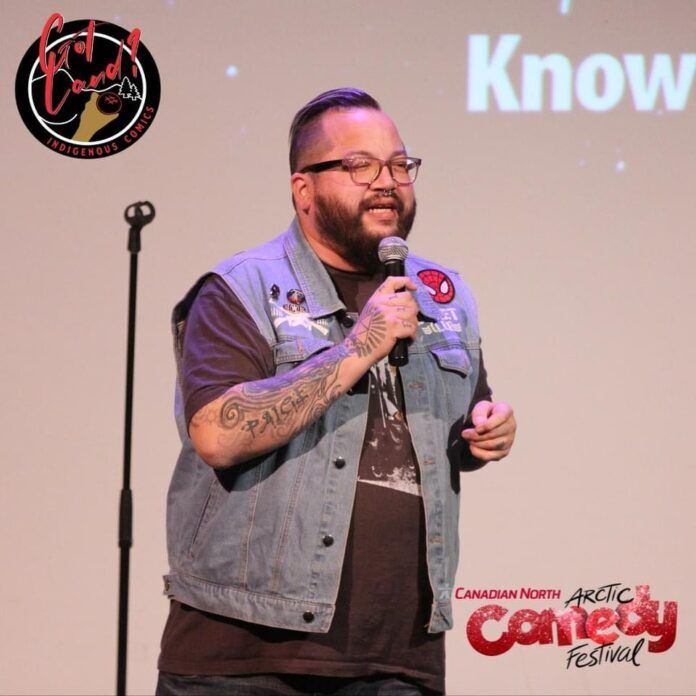 Dez Loreen is a Northerner who wears a lot of different hats. He’s an outgoing community member, a standup comedian, and he’s one of the people that started Totally Arctic wrestling. When I first spoke with Dez for a True North Tale, it was before the pandemic started, and he was really excited to see what Taw could do. And here at the start of our second True North Tale, I asked Dez how TAW is doing.

So we’re seeing a lot of sort of more casual fans coming in and it’s fun. We’d love to see it go to the smaller communities. And I, Think it is finally now post-pandemic growing to a place where we wanted it to be. Because I’ve always wanted to bring top-level wrestling to the north. And finally, we’re getting there.

I mentioned earlier that Des also considers himself a standup comedian, and in 2022, Dez got to perform in his second just for Laugh Showcase, where he got to showcase his skills in front of just for laughs, talent scouts. But Des didn’t just get up on stage and start telling jokes. There was a lot of preparation work that went into it before he stepped on stage.

Advice for any young comic or anybody wanting to get out. In any of the arts is put yourself out there, you know, make social media accounts, make a website, and, uh, and just put yourself out there because people, especially now in this age that we are in, you know, with TikTok and social media and the other things, it’s so accessible.You know, I’m not saying it will happen. I mean, it’s obviously a thing about, you know, it’s a talent thing and it’s a whole lot of other things that go into it. It’s not just plug away I don’t know if it’ll happen for you, because there are people who’ve been doing this for 40 years and they still haven’t hit, you know what I mean? So there’s a certain level of when talent meets hard work. Right. But I think that it’s just about putting that hard work in there

I had a bit of a health scare a couple years ago that made me. You know, like, what if this is the end of my story, right? What have I done after that? I started like really picking up the comedy. We did Taw. I started a couple of podcasts and I’ve just been trying to keep myself active because I want people to remember, my legacy of entertainment here in the north and I want kids to say, You know, maybe I didn’t find him funny, but I think it’s cool that he did what he wanted and I can do that too cause I have interests of my own.-Dez Loreen, Northern Commedian and Buisiness Owner

Listen to the Full TNT here!