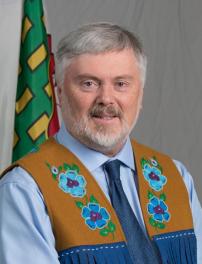 Kevin O’Reilly the current MLA for frame Lake moved up to the north many years ago. And he stuck in Yellowknife for so long just because it’s such an interesting place.

“Where else in the world can you go shopping and bump into cabinet ministers and have a conversation in the grocery store. So it’s a place I think, where if you are interested and have an inclination, you can get engaged and involved in almost anything here.”

And getting involved is exactly what Kevin O’Reilly did. First, he served on council for a number of years, and then he moved to a different order of government.

“I felt that it was a right move for me. And I’ve been in a job for 10 years. And it was time for a change. So I threw my name in the hat and very happy to serve people in Frame Lake and i’m in my second term now.”

And when Kevin’s not serving on the Legislative Assembly, he still finds fun stuff to do here in the city.

“I like cross-country skiing. I’m not a fabulous skier. And I don’t do the skate skiing. But it’s been interesting during the pandemic, where people have reclaimed kind of these little lakes around Yellowknife and put in trails, around the edges of the lakes for skiers. And I really love now skiing around Frame Lake because it’s got some tremendous scenery, you know, you can ski by the ledge, but there’s all these kind of little bays and things that you can dip into.”

And just because Kevin works in government at the Legislative Assembly doesn’t mean he along with the other MLAs don’t get to have some fun while they work.

I really enjoyed the opportunity to pass notes to each other, which we’ve missed for the last couple of years where we haven’t had pages in the house to kind of deliver notes. And I know there’s been some interesting notes exchanged over the years of the house and I’ve got a little stack sake. Not all of which are probably public content for some pretty interesting jokes and drawings and things that Emily’s I know share with each other and I’m looking forward to that opportunity of pages in the house again so we can exchange notes and share insights and so on.

You can listen to Kevin’s TNT here!