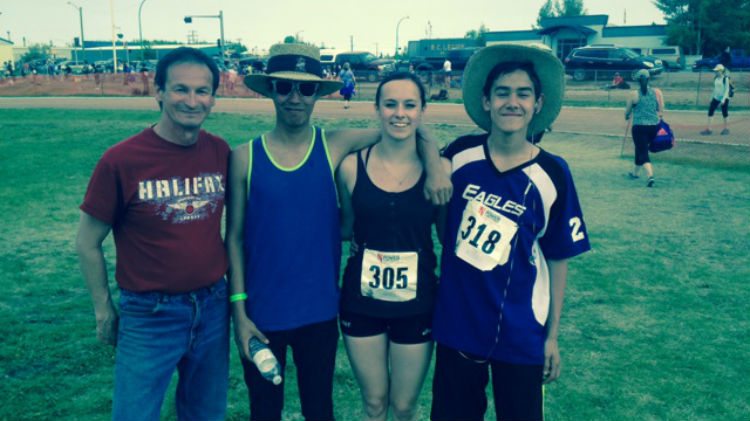 The largest outdoor sporting event in the territory has come to a close, and with it, a new class of northern champions has been born.

The town of Hay River celebrated 25 years of hosting the NWT Track and Field Championships this past week, and to the casual spectator, the three-day event went off without a hitch.

Altogether, more than 1,000 athletes of all ages took part in the championships including students from Aklavik, Lutselk’e and Deline.

The tone for the event was set with an opening ceremony to remember Wednesday night. For the first time since the championship’s early years, the ceremony was held outside as opposed to inside the Don Stewart Recreation Centre.

On the field between Princess Alexandra and Harry Camsell schools, athletes were officially welcomed to the games by a delegation of territorial leaders, town officials and NWT Olympians Brendan Green, Michael Gilday and Sharon Firth.

Once competition heated up on days two and three, previous territorial bests were beaten and new champions were crowned.

Track and field coordinator Jessica King has lived in Hay River for a decade now. She helped organize the opening ceremony but also spent time refereeing some of the events.

King told Moose FM a number of records were set on the final day of competition, but one particular event produced three new territorial bests in a span of minutes.

“I was called in to sign off on a broken record in the senior men’s shot-put and it was broken with a throw of 10.09 [meters]. “They asked me to stay in case it was broken again and then a second person on another team broke the record with a throw of 10.34.

“But then the first person wanted their record back and broke it again at 10.35m. I’ve never seen that before and I’m stunned by it.”

That record was one of several broken during the three-day event, including a new best in the midget boy’s 3000-meter race.

“You get nervous [before the race]. Your stomach hurts a little but then when you start running it’s alright,” he said.

“Right at the end of the race was hard because I knew there was someone right beside me.

“I used to do sprints but I moved into the longer distances and I’m better at those now.” Taylor, who also took part in shorter track events, spoke to Moose FM about how hard she pushed herself even when her body didn’t want to.

“When they line you up, I get nervous in my stomach but in my head I know I can do it,” she said.

“When you’re doing it you know you can’t give up even though you want to because if you give up then you’re just letting yourself down.

The championships concluded with a closing ceremony on Friday afternoon.