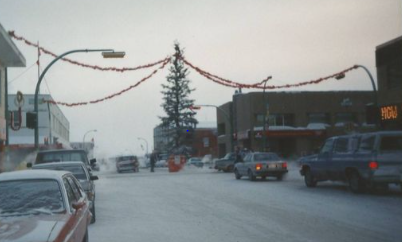 The start of the Christmas season varies from person to person. For some it might be when Christmas songs get played in the local stores, others it might be when they start to see Christmas lights on neighbouring houses. But for those who grew up in Yellowknife in the 70s and 80s, it might be the giant Christmas Tree in the intersection of 50th and 50th.

Mayor Rebecca Alty was one of those residents and remembers the Christmas tree well. She says the tree was a highlight of the Christmas season.

“Getting to drive up and look at it, and it was always this giant tree because it was in the middle of the intersection, decorated with lights and all that stuff so, as a kid it was always so festive to see and it was really the start of the Christmas season”.

Of course a giant tree in the middle of one of the busiest intersections caused detours to traffic, and slowed down the cars in the area, but Mayor Alty said as a kid at the time it felt like it was worth it for the Christmas feeling.

“You always came down to see the tree and then you would do some Christmas shopping around the area. Just a festive way to decorate the downtown.”

At the time, what is now Somba ‘Ke Park was a parking lot and a skating rink. With the lighting of the lights in the Park, Mayor Alty says she prefers this route and does not see the Tree returning to the 50-50 intersection anytime soon.

“Now Somba ‘Ke is just this beautiful space and it’s so lit up, so I think it’s now better with the whole Somba ‘Ke winter wonderland, having the Christmas Tree here instead of the intersection there, but never say never, maybe it’s an idea we can consider in the future. But I think right now, with the winter wonderland that’s created in Somba ‘Ke, it makes more sense to have the tree over here.”