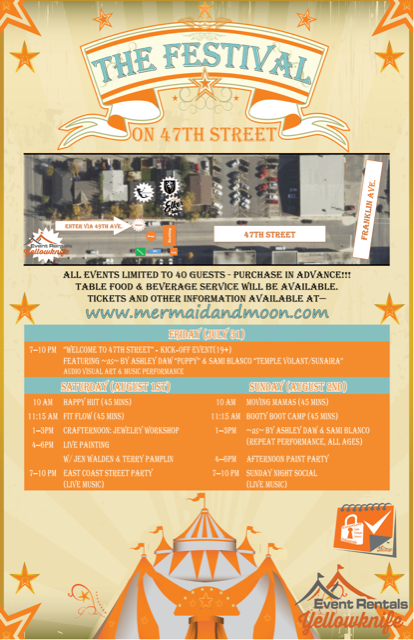 With the arrival of the recently announced Festival on 47th Street just around the corner, MyYellowknifeNow.com’s Greg K sat down with the organizers of the new festival, Meredith McNulty (owner of Mermaid & Moon Boutique) and Colin Dempsey (owner of Event Rentals Yellowknife) to discuss the process of getting the festival through all the red tape, when they started planning the festival and much more.

“Greg – This is the first festival that Yellowknife has had since the whole COVID situation, what made you two decide to do this?

Colin – Well this was kind of something we were looking at doing last summer. I put together some templates for different community festivals just to try and think of ways to create more things to do. Obviously, you know with my business we like to have things going on because that’s business for us but also I’ve worked a lot with small businesses over the years, artists, Farmers Market vendors, lots of different startups and micro businesses. I know how essential these festivals and opportunities are particularly during the summer since it’s a short season. So we took that model for a privately organized festival, and we were looking at doing it in the fall for Meredith’s grand opening but then that got delayed then we were ready to go again in March, and then of course this virus came and suddenly everything shut down. At that point we just kind of looked at the August long weekend with everything else canceled. I usually organize the vendor market for Ramble & Ride on that weekend, and given that that was cancelled, given that Folk on the Rocks, Festival on Franklin and all these other things are canceled, I thought geez, maybe there’s a way we could do this just with a little bit extra effort and planning, and so we came up with this model.

Meredith – Yeah, and the other reasoning behind it is that we wanted to create an event that is supportive of artists and small businesses in town, especially those that were affected with COVID and had to close, or maybe weren’t producing art or able to make an income off of the talents that they normally would make an income off of. So the festival is really supportive of the arts community and most of the events are arts based or featuring a small business owner in town.

Greg – You mentioned red tape to be able to set this up having to get through the chief public health officer and the city. How was that process and was it a struggle to get through all that?

Colin – I was prepared for worse, I guess would be the way to put it. I found that public health and environmental health were really reasonable and supportive. I went into it with the expectation that they would want to see a very carefully laid out plan and that’s what I gave them so I like to think we made it easy for them by having a detailed plan and thinking through all the various aspects in advance. The city was agreeable to closing the street for the weekend, which makes this possible. I expected a lot of challenges, but I’ve been pleased with the support we’ve received so far, or at least the permission we’ve received so far.

Greg – Now Meredith, you mentioned that the festival is helping support local artists such as having events that feature local musicians, local artists, jewelry making, kind of something for everyone. Just how much reception have you gotten from the local artists community on this?

Greg – What guidelines will there be to follow for the festival?

Meredith – In terms of the fitness it’ll be show up and bring your own mat. The festival is all outdoors as well so we’re limited in capacity with the amount of people at all of the events. It’s all limited to 40 people per workshop.

Greg – Now what’s a festival without good food. What do you guys got going on for the food setup at the festival?

Colin – So for the whole festival, for all the performances other than the fitness classes, you’re going to be seated as there’ll be assigned seating. We’re gonna have table service, and we have worked it out with Elke’s table. She’ll be providing hot food and we’re gonna have a special menu so you’ll be able to order your food and order your drinks right at your seat. The evening events are licensed also and we’ll just be able to put your tab together and you clear it at the end of the event.

Greg – And the festival is kind of hitting, a whole bunch of the community who could use support and that includes local businesses as well, what are some of the vendors that will be out there?

Meredith – On both Saturday and Sunday, from about noon to four I have a few different artists vendors signed up at a small table on the lawn. A few that I have confirmed that should be there are YK Gold & Silver, Laurence Bilodeau and Old Town glassworks as well.

Greg – Usually with weekend festivals, Saturday is the big night, however with Monday being a holiday are there big plans for the Sunday night as well?

Meredith – The way that we’ve got it set up is that there’s two of each of the live music and arts performance events, with the exception of the live painting. On Friday night, we have DJ Sammy Blanco and Puppy performing a visual art performance and that same performance will happen on Sunday as well, only the Sunday one is all ages, so it’s a family friendly event. Then Saturday night it’s an East Coast street party so fan favorite Jim Taylor will be playing his East Coast tunes and then the same performance will happen on Sunday as well with the addition of a few other musicians including Patrick Jacobson and Ryan Dempster.

Greg – Now, for anyone who wants to get tickets because it is limited and you gotta get those before they’re gone. Where can they do so?

Meredith – All the tickets right now are just on mermaidandmoon.com. All the events are on the homepage and they can just be purchased online.

Greg – Awesome. Well, I cannot wait for the festival. Thanks so much for joining me guys.”

The Festival on 47th Street kicks off this long weekend from July 31st through August 2nd and will be held in front of Mermaid & Moon Boutique at 4909 47th Street.

One new COVID-19 case in YK, one in Diavik