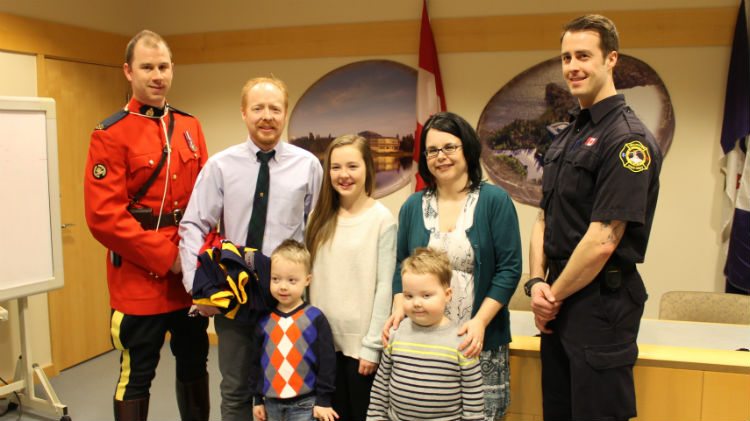 A cheque for $22,000 was presented to the family of Malcolm Austin in the legislature Tuesday.

The funds were raised during Saturday’s ninth annual Memorial Hockey Challenge. Organizers say more than 700 fans and supporters turned up at Ed Jeske Arena over the course of the game.

In addition to the cheque for $22,000, Yellowknife RCMP say well over $10,000 of in-kind contributions have been made directly to the family from companies and residents who wish to remain anonymous.

The Memorial Hockey Challenge has traditionally honoured firefighters Cyril Fyfe and Kevin Olson, who died on duty in 2005, and RCMP Constable Christopher Worden, who was killed while on duty in Hay River eight years ago.

But this year, all proceeds will benefit the family of six-year-old Malcolm, who has a rare and aggressive form of brain cancer.

Since his diagnosis in October, Malcolm’s parents told Moose FM their lives have been transformed.

Read: For A Family Coping With Cancer, Why A Hockey Game Matters

Yellowknife firefighters would go on to win Saturday’s game 5-4 on an overtime goal by Pete Mercredi – a result that surely delighted Malcolm who revealed before the game that he was backing the fire division.

“Unfortunately RCMP were defeated,” reads a press release issued by the Yellowknife detachment. “But knowing that the family of Malcolm Austin will benefit from the game has softened the blow.”

Yellowknife RCMP and firefighters delivered the cheque to Malcolm directly on Tuesday.

The Austins will spend the next week and a half in California, where Malcolm and the rest of his family will visit Disneyland.