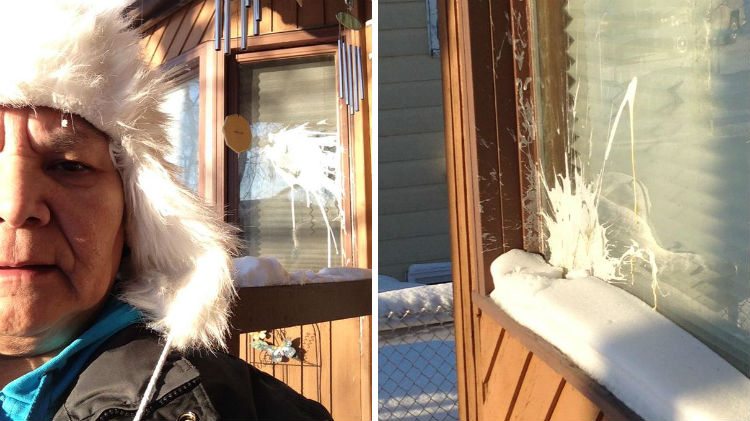 Villebrun left her downtown residence at around 12:30pm on Friday, then came back at 1:45pm to discover what appeared to be paint thrown on several windows.

“I’m just so disgusted,” she told Moose FM. “Only people that want to bully somebody, or terrorize them, would do this type of act.”

Villebrun, Dene national chief from 2003 to 2006, is known in the Northwest Territories for speaking forcefully on the subject of the Dene people.

Now, she fears something she said may have made her an enemy.

“I can only speculate that whoever did this does not like what I put out in my tweets or my public opinions,” she said.

“I’m one of those people that does stand up at meetings and I do get attacked, quite often. But it’s not going to deter me.”

Villebrun says she has been targeted in the past, when living in Fort Resolution. She claims some people in that community turned against her when she exposed ‘corruption’ among community leaders.

“People retaliated against me. I had my tires slashed, my truck egged and my home egged in broad daylight,” she told us.

Villebrun will report this latest issue to police, but is pessimistic about the chances of tracing the offender.

“I have no clue as to who would do this,” she admitted.