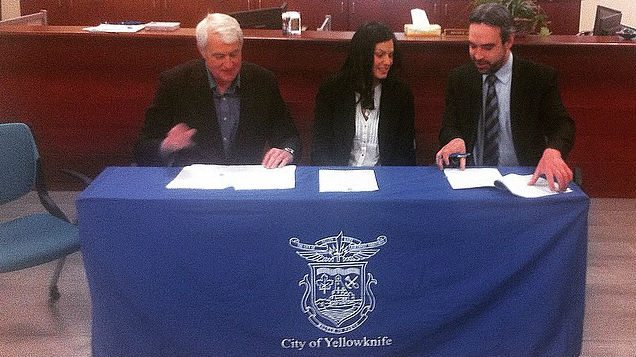 Homeless youth in Yellowknife will have a new facility available to them on June 1.

The City of Yellowknife has teamed up with SideDoor Youth Ministries to support the purchase of a 10 to 15 unit building to serve homeless or at-risk youth between the ages of 16 and 24.

Through a federal program, the City will be contributing $594,000 over the next five years.

Yellowknife mayor Mark Heyck signed the agreement on behalf of the city on Thursday.

“Research shows that if people fall into homelessness in their youth they’re much more likely to struggle with homelessness into adulthood,” Heyck told Moose FM.

“To be able to put real infrastructure on the ground that’s going to house youth between the ages of 16 and 24 is fantastic news for Yellowknife.

“The funds will not only provide roofs over their heads. They’ll also provide supports. If youths are having issues with drugs, alcohol or mental health issues, support will be in place to help people with those issues.”

SideDoor executive director Iris Hamlyn told Moose FM her agency wouldn’t have been able to secure the purchase of the building without the city’s help.

She’s confident the new co-ed facility will mark a significant upgrade to their current emergency shelter.

“This building will allow us to not only provide housing, but offer services like literacy, pre-employment and wellness including mental health and addictions.”

Hamlyn says the new facility will be staffed 24/7 and provide youth with all the tools they need to better their situation.

“People who aren’t involved in dealing with homeless youth or adults will generally say that all they need to do is get a job but our research has shown that that’s the last thing they need at this point,” she said.

“95% of our homeless youth have exited out of the foster system so we need to bridge the gap between exiting the foster system and adulthood by teaching them valuable life skills. This program will seek to do that.

“Youth are our future so I think the city has done a great job supporting homelessness and being proactive in their community.”

Hamlyn says SideDoor is still in the process of securing its purchase of the new building so its location hasn’t been made public at this time.

It will open under the name Hope’s Haven.