Get ready for ‘a new Arctic’, warns hydrologist 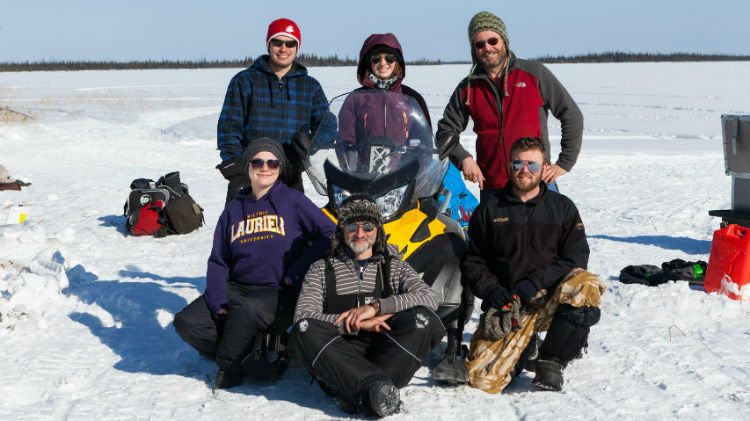 The water of the Northwest Territories is changing, and everything from forest fires to highways will be affected.

That’s the message from Bill Quinton, associate professor at Wilfred Laurier University, who has been studying what is happening to the territory’s water – and will present on the topic at the NWT’s legislative assembly on Wednesday evening.

The change Quinton describes sounds fairly innocuous at first: more water appears to be running off into rivers, and less is being stored in the soil.

That ties in to a broader melting of the permafrost, which Quinton estimates has receded by almost 30% since the 1940s. Forests in the southern portion of the territory are becoming muskeg; in the north, the treeline is extending into the tundra.

But what change does that mean residents will see in five, 10 or 20 years’ time?

Some consequences are obvious, Quinton (pictured, back right, with students) told Moose FM.

“If you take away the forests and replace them with wetlands, the animals that would have relied on the forests for protection, food and so on – that’s going to change,” he said.

“Those who follow traditional hunting practices, it will impact them as well.”

However, other effects you might notice are more subtle. Quinton says highways are one example, as changing water conditions may make the land in general – and hence the roads – more susceptible to flooding.

“If the river systems are producing more water [through increased run-off], you would expect the chance for flooding would increase,” Quinton told us.

“You might notice, along the highways in certain parts of the NWT, there are extra culverts along the side of the road.

“Culverts are getting washed out more than ever before – you lose one culvert, you replace it with two or maybe three, because there’s that amount of uncertainty with regard to changes in water resources and how that impacts infrastructure.

“If you can’t make it past a certain point [on the highway], maybe this is an instance where your water resources are changing to the point where we have to rethink our deployment of appropriate infrastructure.”

Quinton says less water in the soil almost certainly will have an effect on the potential for future forest fires in the North, but estimating what exactly that will be is tricky. The climate is changing in ways that mean it’s hard to accurately assess all of the consequences.

“Warming means there’ll be changes in evaporation regimes over the land, and the amount of soil moisture would be susceptible to change,” said Quinton.

“That means, in turn, the susceptibility of soils and forests to burn when they’re struck by lightning will change, too.”

Quinton, who believes the NWT is warming at one of the highest rates in the world, says all of this adds up to “a new Arctic” on the way.

But he believes that does not necessarily equate to bad news – as long as residents, and governments, are prepared for the ramifications.