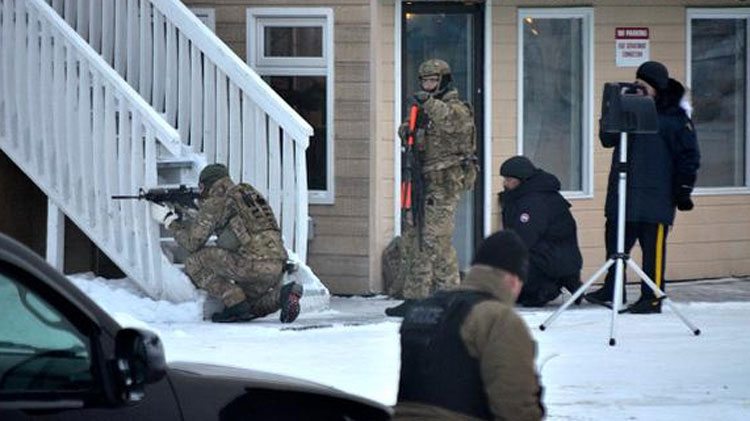 UPDATED 19:11 MST – A man is in custody after an armed standoff at Yellowknife’s Northern Lites Motel.

The standoff ended shortly after 1:15pm on Thursday. RCMP were first called to the scene at around 4:15am.

The 5100 block of 50th Street, outside the motel, remained closed off throughout the morning. Armed police (pictured above) surrounded the motel. RCMP say the man had an unspecified weapon.

“We have taken one person into custody. There were no injuries to the individual who was taken into custody, or police. The investigation is continuing,” Constable Elenore Sturko told Moose FM.

“When we can resolve a situation without incident, it is a win-win situation. The public is not at risk, the individual has not been harmed, and member safety has been protected,” Sturko later added in a statement.

That statement confirmed the man had “indicated a hostage situation” when he first spoke to RCMP this morning.

Charges against the man are pending. RCMP say the public was not at risk.

After the standoff had ended, members of staff at the motel told Moose FM the incident had been caused by a drunk man claiming he was holding hostages.

“It was just some guy making a phone call to the RCMP, saying he’s got some hostages,” said a staff member, who asked to remain anonymous.

“It’s the wrong timing after the Australian hostage case. The police took it very seriously.”

Confirming their belief that no hostages had been involved, a member of staff added: “It was just one man, only.”

However, RCMP have since stated they do not consider the incident a hoax, and are aiming to provide more information on Friday.

On Thursday morning, a police negotiator could be heard talking calmly and reassuringly to the occupant of the motel room.

A bystander told Moose FM he had seen police lob smoke canisters, or similar, into one of the motel’s rooms shortly before the standoff ended.

A police robot, on caterpillar tracks, was seen being taken away from the scene. Police dogs were also in attendance.

NNSL’s Walter Strong tweeted this image from the standoff: