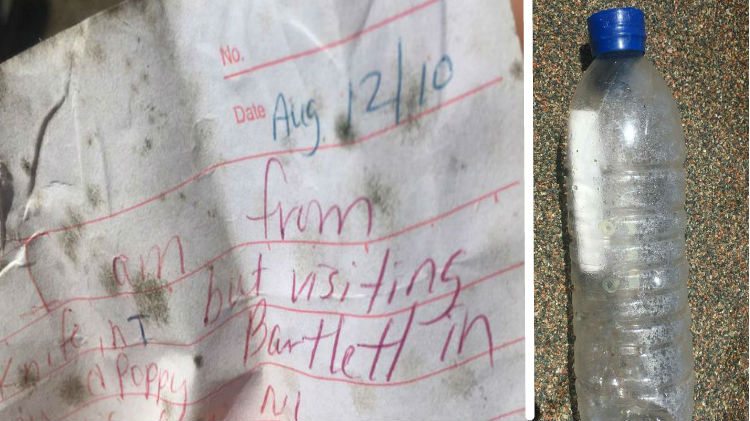 Yellowknife’s Brianna Brenton was only six years old when she dropped a message in a bottle on Newfoundland’s coastline during a visit in 2010.

Six years later, her message has been found.

Brenton dropped the bottle on Flarity’s Beach when she and her mother were visiting Coomb’s Cove – a small community along Newfoundland’s southeast coast.

Read: Did your child send this message in a bottle off New Brunswick?

“She said she wanted to write a letter, so we put it in the bottle and off it went,” said Brianna’s mother, Tammy Brenton.

The bottle was found by Robin Benoit last Friday in Harbour Breton – a fishing community in Newfoundland roughly 15 km from where the bottle was dropped.

She and her husband were walking along Dead Man’s Beach when the bottle appeared at their feet.

“We actually thought people threw away trash, so my husband and I stopped to pick it up and bring it back to the car with us,” said Benoit.

It wasn’t long before the two realized it was something much more.

“We noticed there was blue tape on the top of it, and my husband said ‘that looks like a message in a bottle,’ so we sat on the beach, opened it up and there it was,” said Benoit.

“At first when I saw the Facebook post, I couldn’t remember because I was so young,” said Brianna, who’s now 12.

The family visits Newfoundland every few years after moving to Yellowknife 19 years ago.

“We always went to this beach growing up so that why I always take my kids when we visit,” said Brenton.

After the two parties connected on Facebook, Brenton is hoping Benoit will visit the North.

“If she does come to Yellowknife, we will definitely be her tour guide,” she said.