‘Thought it was a gag’: McBryan describes Meat Loaf’s collapse 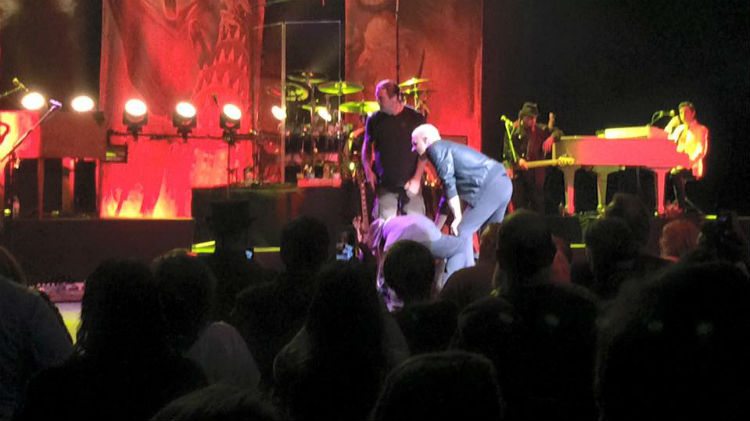 Mikey McBryan feared he may have witnessed history after him and his mom watched Meat Loaf collapse on stage during a performance in Edmonton Thursday night.

Video of the incident shows the 68-year-old singer – whose real name is Michael Lee Aday – knocking over his microphone stand before falling to the ground in front of hundreds of fans at the Northern Jubilee Auditorium.

Buffalo Airways general manager Mikey McBryan and his mom were only four rows back of the stage when they saw the American rock star go down.

McBryan admits the singer appeared to be “off his game” before collapsing towards the end of his set.

“I hate to say it but it looked like he was off his game a little,” he said. “Everyone was into it but his hand was shaking a bit and he flubbed some lyrics here and there.

“And then during his last song, he was way off and then all of a sudden he just stopped singing and fell down. We all thought it was part of the show and that it was a gag and then security told everybody to leave.

“Everyone was just in shock. It was a weird tone outside the stadium where it was like, ‘did we just see history?’”

Thursday marked the first time McBryan had ever seen Meat Loaf perform live. He told Moose FM he bought the tickets to celebrate his mom’s birthday.

“It was my mom’s 70th birthday and back when I was young she just loved Meat Loaf,” he said.

“She’d always be playing it in the car so once I heard he was coming to Edmonton, I got us fourth row tickets so we were right in the action.”

On Friday morning, a publicist for Meat Loaf said the singer’s vital signs were “stable and normal” as he recovered in an Edmonton hospital.

In previous interviews, the performer has said he suffers from asthma and a medical condition that causes an irregular heartbeat.

A press release issued Friday morning indicated that Meat Loaf collapsed due to severe dehydration but that he was “responsive and recovering well.”

In the same year that music fans have had to say goodbye to legends like David Bowie and Prince, McBryan says he wasn’t prepared to lose another.

“People were around saying we’ve lost so much in 2016. We don’t need to lose any more people.”

#MeatLoaf just collapsed on stage I was there 🙁 #Pray pic.twitter.com/vCDyWp6ccw