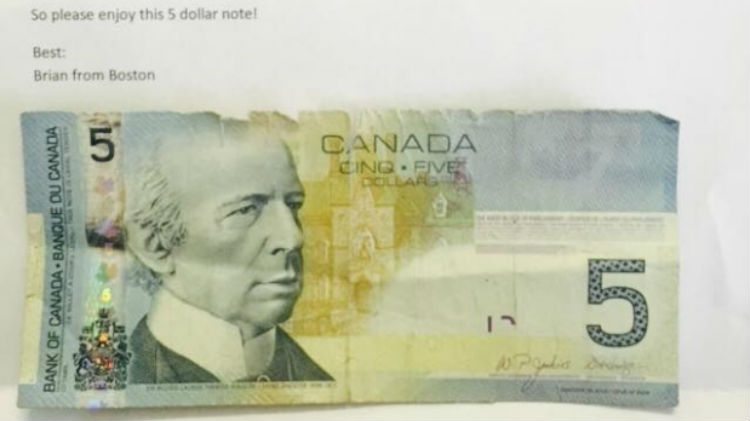 As the old adage goes, one man’s trash is another man’s treasure.

Or at least in this case, an ‘annoying’ $5 Canadian banknote makes more sense in the hands of a Canadian than it does in the wallet of a Bostonian.

That exchange happened randomly in Fort Simpson this week when a woman named Beth Jumbo received a note and a $5 bill in the mail from a man identified only as “Brian from Boston.”

According to a letter written by “Brian” – which has since been shared on Facebook – he visited Quebec City five years and has had the bill in his wallet ever since.

Because he figured he wouldn’t be visiting the country anytime soon, he decided to put the ‘annoying’ bill to better use by mailing it to a random Canadian instead of throwing it out.

Jumbo, a senior administrative official in the village of Fort Simpson, was the lucky recipient after a bill with Sir Wilfred Laurier on it appeared in her mailbox Tuesday.

“I can’t be throwing away good money so I thought I’d mail it to someone in Canada,” the letter read.

“I don’t know anyone in Canada, so I decided to find a more remote place using Google Maps and see if I could find a name and an address.

“And there you were, Senior Administrative Office Town of Fort Simpson.”

Jumbo told CTV News the package was a ‘pleasant surprise’ and an experience that she immediately had to share with her co-workers.