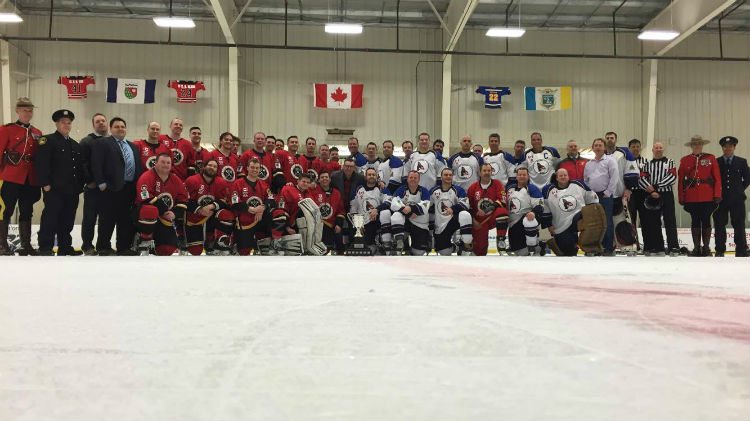 Funds will also be distributed to YK Cares, an organization that distributes food to underprivileged children in the community.

Read: ‘Time To Give Back’: Flames Alumni To Attend Memorial Challenge

The event celebrated its tenth year when teams of RCMP officers and firefighters faced off against each other April 24 at Yellowknife’s Ed Jeske Arena.

The game is meant to commemorate the lives of Cyril Fyfe and Kevin Olson, Yellowknife firefighters who died on duty in 2005, and RCMP Cst. Christopher Worden, who was killed in the line of duty in Hay River nine years ago.

“Theo enjoyed his time and the attention that was brought to various causes was well worth it,” he said.

“The business community in the Northwest Territories is always willing to help and be supportive of the RCMP and firemen. We raised pretty close to the exact same amount we did last year with half the people.”

Even though attendance was down considerably this year, Johnston says corporate and private donations made up the difference.

Funds were also raised through general ticket sales, silent auctions and other events.

In the end, the Mounties won the game 12-6 over Yellowknife’s firefighters. An official cheque presentation will be held at the Yellowknife RCMP detachment next Friday.