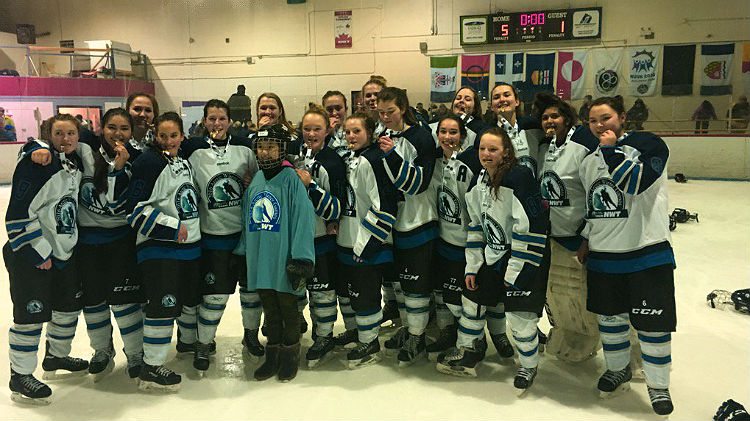 Gold sees the team improve on bronze two years ago in Fairbanks, Alaska. The territory reached the final for the first time since 2008, in Yellowknife, when Alaska beat the NWT 3-1.

The bantam team lost a hard-fought final 5-4 against Alberta North to go home with silver.

In Greenland more gold ulus rolled in for the NWT throughout Thursday – including an emotional victory for Yellowknife’s Stacie Bengts in Arctic Sports.

“My good friend, Mel, passed away a couple of weeks ago so I dedicated my performance this week to her,” said Bengts.

“She would have pushed me to go even further so I did it in her memory. She was such a positive and pushing energy that I really do think this is the best way to honour her. She would have absolutely cried knowing that I did well.”

The 27-year-old wins her first medal in her sixth appearance for Team NWT at the Arctic Winter Games.

Underwood Day added his third gold ulu of the Games in the same venue, winning the junior boys’ one foot high kick. In Dene Games, Dalton Beamish won the junior male finger pull while Kayleigh Hunter-McKay picked up her second ulu of the week with juvenile female gold.

Having missed gold by a hundredth of a second earlier in the week, 13-year-old snowshoe athlete Kea Furniss finally won on her last day of competition.

“I’m really happy. The first day I had been so close to gold,” said Furniss, who won the juvenile girls’ 5 km race. “It means a lot, I’ve been training really hard.”

Furniss competed in snowshoeing having missed out at ski biathlon trials. She told 100.1 The Moose she’s now thrilled with the decision to pursue snowshoeing, despite initial reluctance.

“I’m really glad I tried it. It was a lot more fun than the first time I tried it – I knew what I was doing, I had a coach teach me and I met a lot of nice people.

“Don’t give up because you can either try for another sport or keep working and you’ll get it next time,” added Furniss. “You never know what’s going to happen and, if you keep training, you can improve a lot.”

The junior girls’ volleyball team won bronze with a 3-0 victory over Nunavut, but the boys had to settle for fourth after defeats by Alaska and Alberta North.

NWT basketball players have a big day ahead on Friday with both teams playing Alaska for gold. The junior girls beat Yukon 66-50 to reach the final while the boys defeated Nunavut 71-48.

The territory’s four other futsal teams were all beaten in their semi-finals. The juvenile boys finished fourth after losing their bronze play-off 2-0 against Yukon, while the remaining three teams play for bronze on Friday.

In badminton, two of the NWT’s doubles teams – Christina Bonnetrouge and Aodhan Mooney in junior girls, and Riella Bordey and Taylor Maurice in juvenile – reached bronze medal play-offs but missed out.