Images: Inuit artifacts stored in Yellowknife off to Winnipeg 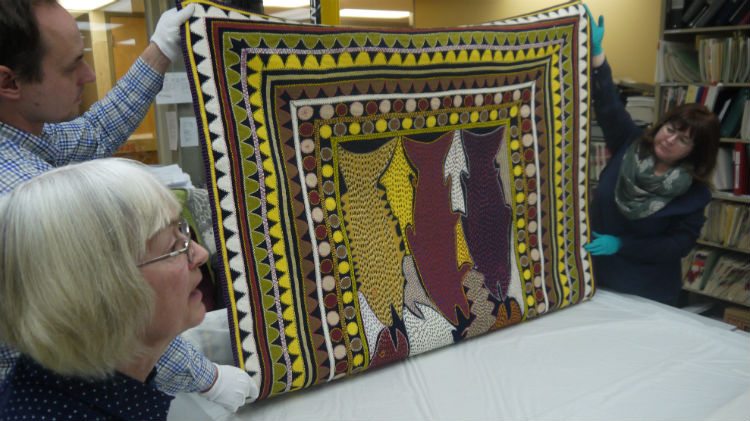 8,000 Inuit artifacts that have been cared for at the Prince of Wales Northern Heritage Centre for years will soon be making their way to Winnipeg.

Over the past month, curators from Yellowknife’s museum and the Winnipeg Art Gallery have been carefully packaging printings, tapestries and sculptures to be trucked down south.

The objects, which belong to Nunavut, have been cared for by the Northwest Territories ever since Nunavut was created in 1999.

When Nunavut first became a territory, curators in Yellowknife agreed to display only NWT objects yet still provide care for artifacts belonging to their territorial neighbours.

But under a new loan agreement between Nunavut and Manitoba, much of the Northern Heritage Centre’s Inuit fine art collection will be moved to the Winnipeg Art Gallery on a temporary basis.

This marks the first time objects belonging to Nunavut will be removed from Yellowknife to be transferred to the Government of Nunavut’s care.

Luke Palka, manager of production and design at the Winnipeg Art Gallery, has been working to move the artifacts down south for weeks.

“It’s been logistically challenging just with the sheer amount of pieces and the complexity of getting sculptures from Yellowknife to Winnipeg,” he said.

“It took months and months of pre-planning. We had to stage it all in separate ways in order to accommodate trucking routes and get it all there safely.”

Palka says the Winnipeg Art Gallery, which has the largest public collection of Inuit art in the world, is planning a brand new Inuit Art Centre at the facility.

Most of the artifacts being transferred are prints, however roughly 1,000 sculptures are on the move as well. Upon arrival in Winnipeg, curators will decide which items will be put on display and which will be put into storage.

“Some of the staff have been here for a very long time and have gotten to know these objects,” she said. “But I think generally we’re very happy to see that this transfer is going to mean greater access.

“Winnipeg is a bigger city centre that more people can visit and I also think they have plans to digitize and take photos of everything.”

Carr-Locke says that means people will be able to see some of the artifacts online.

The Winnipeg Art Gallery also has plans to create a visible storage unit – or ‘clear vault’ – so that items are more visible to the public.